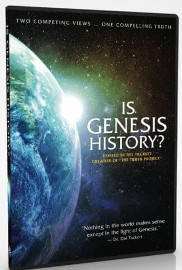 Is Genesis History? is a 101-minute feature film narrated by Del Tackett. It argues for the acceptance of the historical accuracy of the book of Genesis as a lens through which we can understand both science and theology.

It discusses the two primary competing views of the history of the earth and the presuppositions that inform them--materialistic evolution and biblical creation. The biblical creation point of view presented here is that of a young earth—that the earth was created within a short time span only thousands of years ago rather than gradually over millions or billions of years. The film also discusses the importance of the Genesis story of Adam and Eve and the Fall as foundational for a proper understanding of scripture, theology, and history.

To create this film, Tackett traveled all over the world to locations where he met up with scientists and other experts who explain scientific evidence for a creationist viewpoint, the age of the earth, and a global flood. Together, in the video, Tackett and his co-hosts explore topics such as the “pancake-like” layers of deposits in canyons, the fact that dinosaur bones have been found deposited in concentrated areas without time to decay before they were covered up, the Cambrian explosion with its multitude of diverse and complex life forms, problems with methods of dating for geology, genetic variability within species, a possible cause of the ice age that fits with the biblical account, and aspects of microbiology that demonstrate the interdependence of biological systems.

Some of the scientific evidence is amazing. For example, I did not know that they had found soft tissue from dinosaurs that was still pliable and in which they could view cellular structures. The science includes some very recent discoveries like this that help to make a compelling case.

Since scientific evidence is a major topic throughout the film, the most appropriate audience is probably about ages fifteen and older—people who have a sufficient grounding in science and religion to understand what is being presented. It’s a great film to show for a church group.

While many people think creationists ignore science to cling to a mythical view of creation, the scientific approach of this film strongly contradicts that viewpoint. Whatever your thoughts about the origins debate, this film presents compelling evidence that deserves broad discussion.

Beyond Is Genesis History? 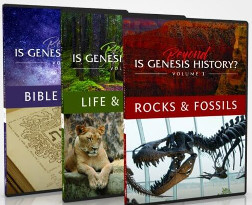 In Beyond Is Genesis History?, 48 video segments that run about 20 minutes each expand upon individual topics addressed in the main film. These were obviously filmed at the same time as the footage for the main video described above. With a total of more than 15 hours of content, these video segments offer viewers the opportunity to go deeper into topics they find intriguing.

These video segments are divided into three volumes:

Videos are available as sets of DVDs, via streaming, or as downloads. You can purchase the complete set or individual volumes. These should be great for independent viewing or for groups of teens or adults to watch and discuss together. 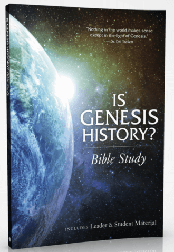 Is Genesis History? Bible Study explores Genesis 1–11 to take those who have watched the video Is Genesis History? into a deeper study of the biblical and theological implications. Both the video and the Bible study promote the belief that what the Bible conveys is historically accurate and should be read in a literal sense. Lessons in this Bible study are taught within the context of the entire Bible to promote a theologically consistent framework for reading all of Scripture. The authors contend that scientific evidence supports their understanding of the book of Genesis, so science is also addressed within this study.

The Is Genesis History? Bible Study Leader & Student Materials book is the core of the course. It presents the course in six sections, each with a  video segment that runs about 20 minutes. (The course is available in as a softcover book and a DVD or as streamed and downloaded files.) The six sections are:

Each section opens with a few discussion questions to interest students in the upcoming lesson. Students then watch the video segment and discuss questions related to it. Video segments repeat some of what is in the feature film Is Genesis History?, but they also have additional material not shown in the film.

The next part of each section of the course is intended to be presented as either one or two lectures on biblical background, theology, history, science, and practical application. The material is frequently presented in a question-and-answer format, although the questions are rhetorical. The teacher presents both questions and answers most of the time rather than expecting students to answer. Bible passages are interspersed throughout this section. This part of the lesson concludes with a Scripture passage followed by three to five questions that should be used for either discussion or written responses. Suggested answers are included immediately after the questions.

The Bible Study Leader & Student Materials book then continues in each section with “Differing Views,” a lengthy portion of text that addresses scientific and historical arguments that conflict with the course’s point of view. For example, these sections address topics such as the use of the word day in scripture, challenges presented by the differing accounts of creation in Genesis 1 and 2, theological difficulties that arise from differing beliefs about the age of the earth, and whether the biblical flood was local or worldwide. As for the other lectures, most of this material is presented in a rhetorical question-and-answer format and is intended to be presented by a teacher. Even though a group class is ideal, these sections can be used for independent study.

Each of the six sections of the study then has “Daily Study” assignments for three days. These include a scripture passage, brief commentary, a set of questions, a brief summation, and a suggested topic for focused prayer.

While the course can be used with mature teens, it seems most appropriate for adults. It can be used in a Sunday school or Bible study setting, with a homeschool co-op group, by a family, or for independent study. A student studying independently can read through this material, then write out answers for the Daily Study questions. (Note that these are the only questions in the study presented without answers.) Each section of the course seems like it should take a minimum of five class sessions, but the number of sessions per section could easily be stretched out with a group class. On the other hand, a teacher could omit parts if there’s not enough time to cover everything.

The way Christians interpret the first 11 books of Genesis has a huge impact on their theology. Is Genesis History? Bible Study curriculum is a great way to explore those theological implications.

Please consider purchasing from the publisher using my affiliate link to help support this website. The Compass Classroom Membership gives you access to these products plus almost 30 others for $39 a month.

Beyond Is Genesis History? Vol. 1: Rocks and Fossils, DVD