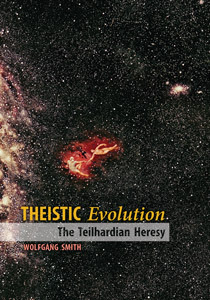 Dr. Wolfgang Smith’s educational and occupational background is in math and science, but for a number of years he has turned his attention to metaphysics, particularly examining and critiquing “scientism,” defined by Wikipedia as “the view that empirical science constitutes the most authoritative worldview or most valuable part of human learning to the exclusion of other viewpoints." Smith's book, Theistic Evolution: The Teilhardian Heresy was first published in 1988 as Teilhardism and the New Religion. Theistic Evolution, published in 2012, has been updated and rearranged somewhat from the original book.

In the intervening 24 years, the influence of Teilhard de Chardin has become even clearer, especially among those holding theistic evolution views. Theological problems arising from theistic evolution seem to undermine belief in Adam and Eve’s fall from grace, original sin, and other essential beliefs central to Christianity. While most theistic evolutionists try to reconcile these problems while remaining within the boundaries or historical Christianity, de Chardin seemed determined to reinvent Christianity to make it fit into a worldview based on evolution as the central idea. Smith writes:

For Teilhard de Chardin, evolution is not simply a scientific theory, but an established and henceforth irrefutable truth. It is in fact the rock upon which he would found his entire doctrine. “Is evolution a theory, a system or a hypothesis?” he writes. “It is much more: it is a general condition to which all theories, all hypotheses, all systems must bow and which they must satisfy henceforward if they are to be thinkable and true. Evolution is a light illuminating all facts, a curve that all lines must follow.” ( p.25).

While most theistic evolutionists have at least some concern, if not a great deal of concern, for theological orthodoxy, many have been heavily influenced by de Chardin to the point that they adjust their theology to fit evolutionary assumptions rather than maintaining orthodox theology while exploring scientific questions for which proof remains elusive at best.

Smith draws heavily on de Chardin’s written works with which he seems very familiar. He highlights de Chardin’s key ideas such as the “Point Omega ” (p. 94), “complexification” (p. 53), and personhood developed through a process of “aggregation” (p. 194), examining what de Chardin taught and then contrasting it with both scientific facts and Christian doctrine. This approach is very helpful since it is often difficult to read de Chardin and cut through the verbiage to what he is actually saying.

De Chardin, a French Jesuit priest, ran into serious conflicts with the Catholic Church over his ideas, but he was never excommunicated or formally declared a heretic. However, Smith clearly identifies de Chardin’s teachings as heretical, providing the evidence in this book. For example, he quotes de Chardin’s statement:

"As you already know, what dominates my interest and my preoccupation is the effort to establish in myself and to spread around a new religion (you may call it a better Christianity) in which the personal God ceases to be the great Neolithic proprietor of former times, in order to become the soul of the world; our religious and cultural stage calls for this." (p. 224).

De Chardin’s new religion fits the definition of scientism, and he criticizes traditional Christianity for not being “scientific.” Yet de Chardin’s philosophy also includes improbable New Age spiritual notions alongside his supposedly scientific beliefs. While rejecting the resurrection, saints, and miracles, he proposes “cosmic convergence” and “Christic emergence” (p. 245) among other ideas. De Chardin presented some of these ideas in flowery prose that probably left many readers impressed with the high–minded sound of it yet short on theological understanding.

Theistic Evolution: The Teilhardian Heresy is not an easy read since it’s not dealing with simple ideas. Yet, Smith does an excellent job of helping those unfamiliar with de Chardin understand some of his foundational ideas while simultaneously showing how faulty they are.

Because de Chardin has had such tremendous influence on Catholic thinking about the theory of evolution, I especially recommend this book to Catholics concerned about the Church’s position on the topic.