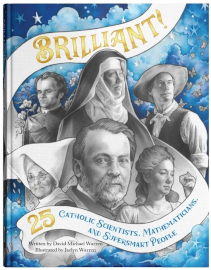 Brilliant!: 25 Catholic Scientists, Mathematicians, and Supersmart People was written specifically to help children understand that faith and science are not in conflict. The authors present short biographical sketches of 25 people to make their point. Although the book is written from a Catholic point of view, and those selected for inclusion in this book are all Catholic, Brilliant! should appeal to many parents who want to help their children understand that an amazing number of the greatest scientists and thinkers also believed in God.

Those selected include saints, priests (including Pope Francis), doctors, educators, mathematicians, musicians, and scientists from many fields. Many of them fall under a number of these categories.

Beginning with St. Hildegard of Bingen (born in 1098), the biographies are presented in chronological order by birth dates. We learn something about the life and circumstances of each one to help us understand the settings from within which they worked or are working.

The selection includes many well-known men, such as Saint Albert the Great, Nicolaus Copernicus, Louis Braille, Father Gregor Mendel, and Father George Lemaître. Some of the lesser-known men we learn about are Blessed Nicolas Steno, considered the father of modern geology; the mathematician, Father Christopher Clavius; Father Angelo Secchi, a pioneer in astrophysics; and Jérôme Lejeune, a pediatrician and geneticist who led the Pontifical Academy for Life. More than one-third of those featured are women such as Laura Bassi, the first female professor of physics; the researcher and humanitarian, Sister Hilary Ross; the mathematician, Maria Agnesi; Sister Mary Kenneth Keller, a pioneer in computer science; and Sister Miriam Michael Stimson, a DNA research pioneer.

The stories frequently restate the thesis of the book to make sure readers understand that faith and science are compatible. In their biography of Pope Francis, the authors include comments based on the pope’s teaching to support the idea that the theory of evolution is compatible with faith. They say, “Catholicism teaches that God created the universe and holds it in existence. Even creatures that evolve still require a creator to make them exist. God may have used the process of evolution to form the human body.… If Catholics understand that God is always involved in the universe and in the creation of human beings, they do not have to choose between faith and science.” (p.92)

The lovely black-and-white drawings that illustrate this book show each person at work or in the context for which they are celebrated. This should help children comprehend that these are true stories of people who loved God and chose to make a difference in the world through their work. Some of them were more obviously motivated by their faith than others, but the point of the book is that people can participate in the world of science and mathematics while also believing in God… and, sometimes, because they believe in God. Since our modern culture seems intent on convincing everyone that you can’t be an intelligent person and believe in both science and God, this book is a refreshing antidote for that false view of reality.