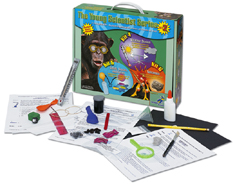 The publisher recommends using them in order. The instructional guides in the kits sometimes refer back to past experiments or suggest the use of an item from a previous kit, supporting the publisher’s recommendation. For instance, the Weather kit in Set 2 suggests that students use the compass they created with a kit in Set 1 or else use the very small compass that comes with the Weather kit. The two such instances I found don’t indicate that any kit will be unusable without a prior kit having been completed. So while the publisher expects the kits to be used in order, I think homeschoolers should have no problems using them when they best fit with topics that students are studying in their science curriculum.

These are the three kits in each set.

Each kit has its own instructional guide (about eight pages long) and a bag of supplies. The supplies include both common and unusual items, and you will need to gather additional supplies on your own. For instance, the Volcanoes kit comes with two pieces of heavy black construction paper, a piece of pumice, an inexpensive plastic magnifier, some black paint, and a paintbrush. You need to supply newspaper, the lid of a shoebox (to contain the "lava"), two half-liter plastic bottles, flour, water, vinegar, red food coloring, baking soda, liquid dish detergent, and tape. Even though supplies are simple in this kit, children will make a papier-mâché volcano before they actually do the experiment. So the kit is not as quick and simple to use as you might think. Keep in mind that this particular kit is for younger students, so some of the other kits use more sophisticated supplies and experimental methods.

The instructional guides have step-by-step, illustrated instructions for the experiments. Sometimes there are more than one experiment to be done with a kit. Brief scientific explanations are included.

These kits are great for homeschoolers who want some direction and assistance with experiments but who don’t want to spend a lot of money.