Our Lady of Victory/Lepanto Press 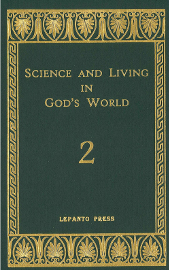 The Science and Living in God's World series for kindergarten through eighth grade are revised reprints of science texts from the 1950s and 1960s, originally published by Mentzer, Bush and Company and J.B. Lippincott Company. Revisions included some (limited) updating of illustrations and content. Some or all of these were originally used in Catholic schools, and the content should be acceptable to all Christians with the exception of mentions of an old age for the earth. (I reviewed only the third- and eighth-grade books.)

These books still retain the appearance of their ancestors, which makes them less visually appealing. Content also seems to lack the sort of serious updating necessary to reflect the enormous growth in technological knowledge in the intervening years. Nevertheless, these texts offer an alternative to those from both secular and Protestant publishers. The textbooks for kindergarten and first grade are softcover books, while textbooks for other levels are hardbacks.

There are booklets with quizzes or tests for some levels, with different arrangements of content for various levels. There are answer-key booklets for all grades except kindergarten.

The third-grade text is actually more interesting than many others written for this level. Divided into eight sections, each focuses on a particular topic in a sort of story format. Children learn about scientific principles within each context. For example, in one section they learn about electricity by reading about some experiments children are doing; these experiments can easily be imitated at home. Activity suggestions are included for each section.

Topics in the eighth-grade text are modern science, animals, respiratory and nervous systems, energy, and machines. It is not particularly exciting, but each chapter does include experiments, thinking- and written-response questions, vocabulary lists, and suggested books for further reading. (The word "evolution" doesn't appear in the sizable glossary at the back of the book!)