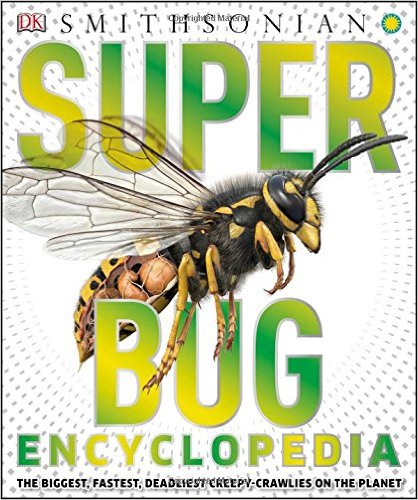 Some kids find bugs absolutely fascinating while others don’t. However, the Smithsonian Super Bug Encyclopedia might engage the curiosity of even the most vocal bug haters. This oversize, 208-page, hardcover book features the most amazing photos and drawings of all sorts of bugs accompanied by snippets of intriguing information.

For example, this book introduced me to a “monster bug” called a giant weta on page 30. This giant, flightless cricket from New Zealand can get as big as a mouse, but it gets so big and heavy that it can’t jump away when threatened. Since it can’t easily escape, it scares away predators by hissing at them like a snake.

The book features the two-page spread layout that is common to most DK books. Each topic or bug has two facing pages with a huge photograph often overlapping onto both pages. Photos and drawings are sometimes hugely magnified so that we can see intricate details.

The first 10 pages introduce bugs, explaining that the category we call bugs includes arachnids, insects, myriapods, and even some crustraceans. This section also describes various ways that bugs move, body features that many bugs share, and the ways that some of them grow and develop by molting or through metamorphosis.

The rest of the book is divided into five sections: Amazing Anatomy, Animal Athletes, Fearsome Hunters, Tiny Terrors, and Life Stories. Amazing Anatomy highlights anatomical features that might be common to more than one bug by selecting intriguing representatives such as as the chemical weaponry of the African Bombardier beetle or the camouflage of the Malaysian leaf insect that looks very much like a leaf with its shape and coloring as well as lines that look just like the veins on a leaf.

Animal Athletes reveals the amazing athletic capabilities of some insects such as the brown froghopper whose muscles work something like a catapult enabling it to jump higher than any other animal and survive physical forces that would kill other creatures.

Fearsome Hunters features bugs such as the tarantula hawk wasp that lays its eggs on the bodies of paralyzed tarantulas. When the wasp grubs hatch, they eat their host victim while it’s still alive.

While all of the bugs in the Tiny Terrors section are not necessarily the smallest of bugs, they are often the most serious pests. For example, hard ticks are “parasites with sharp, piercing mouthparts for sucking the blood of reptiles, birds, and mammals—including humans. They cling on to their victim for several days, drinking up to 500 times their own body weight in blood. In the process, they can transmit nasty viruses, and some of these are deadly if left untreated” (p 144).

Bugs featured in Life Stories have intriguing or repulsive life cycles. The dung beetle is one example. It rolls up huge balls of dung and stores them in underground chambers. It lays eggs in the dung. The dung then serves as the food supply for newly hatched dung beetles. While it sounds repulsive, the process helps to recycle animal waste and fertilize the soil.

The book is written based on evolutionary assumptions as evidenced by statements such as, “Insects too to the air 150 million years before the first bird” (p. 13), but such statements are infrequent.

The Smithsonian Super Bug Encyclopedia will likely appeal to all ages. Even those who can’t yet read might find the pictures curious and fascinating. The amount of text is just enough to be interesting without being overwhelming. Adults are as likely to read it as children. The book teaches in a subtle fashion, using each bug to illustrate and explain anatomy, physiology, and functions that contribute to serious scientific education about bugs. Well done!