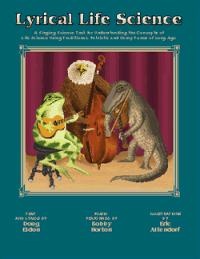 Teacher Doug Eldon struggled to get his sixth graders to remember life science vocabulary and concepts until he hit upon the idea of putting the information to music. The result was the first tape of Lyrical Life Science: a recording of eleven life science songs, professionally recorded with a variety of instruments by Bobby Horton, well-known for his historical ballads. Songs on Volume 1 of Lyrical Life Science pack an amazing amount of detail into lyrics set to popular tunes like "Dixie," "Clementine," and "Yankee Doodle." For example, "Oh Bacteria" is set to the tune of "Oh Susanna" and begins:

"Oh lacking any nucleus, you do have a cell wall

You live in water, air and soil and anywhere at all...."

The meter and phrasing occasionally leave something to be desired, but you can't beat this approach for liveliness. You can't help laughing when you try to sing along to "Algae and fungi, lichen, moss and liverworts...." Topics Volume 1 addresses include scientific method, living things, invertebrates, cold blooded vertebrates, birds, classification, algae/fungi/nonvascular plants, vascular plants, protozoa, genetics, viruses, and bacteria.

Free updates to Volume 1 are available on the publisher's website. These include an MP3 of a new song and 20 pages of revised material for the book. Changes reflect curriculum changes that require children to know names of cell organelles at younger levels than before. There have also been some changes in the classification system

Volume 3 - The Human Body, begins with an introductory song on cells, genes, tissue, organs, and organ systems. Then it focuses on each of the body systems. You will recognize some of the tunes like "Caissons Go Rolling Along" and "Red River Valley," but some others like "Goober Peas," "Old Joe Clark," and "Tarantella" will be less familiar. "The Skeletal System" sung to "Tarantella" is a familiar pirate tune that takes "...the thigh bone is connected to the hip bone...." to a whole other level.

Along with each tape comes a textbook that expands upon the information summarized in the songs. The textbooks, about 100 pages each, are generously illustrated with line drawings and touches of humor. They include song lyrics and simple music. The corresponding workbook lessons offer matching, fill-in-the-blank, essay, and labeling exercises.

Answer keys are at the back. Although originally written for sixth graders, the content reflects some of what we find in typical high school life science texts. Whatever level you choose to use these for, they remain supplements rather than comprehensive courses. While this approach is not for all students, it does offer a rare alternative for auditory learners when it comes to science. And for those who just want learning to be a little more light-hearted, be aware that it is almost impossible to listen to these tapes without bursting out laughing.