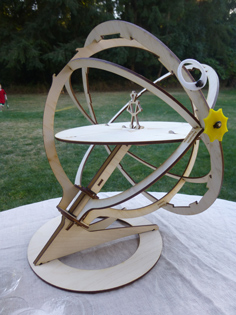 The Horizon Globe is an ingenious hands-on device for learning about the seasons, and the sun, moon, and stars in relation to the Earth. The Horizon Globe is an armillary sphere, a “model of the celestial globe constructed from rings and hoops representing the equator, the tropics, and other celestial circles, and able to revolve on its axis” (dictionary.com).

While there is a professional version of the Horizon Globe constructed from metal, most homeschoolers will be interested in the much more affordable, do-it-yourself model that is easily constructed from wood and plastic. It is designed for observations made from the Northern Hemisphere.

The kit includes the Horizon Globe kit, a small wooden “observer” that is affixed to the platform, and a set of movable plastic pieces for the sun, four phases of the moon, four planets, and 16 constellations. There is also a 158-page book, Basic Astronomy for Homeschooled Teens and other Curious Types, that explains how to use the globe through a series of activities.

Most students will enjoy constructing the Horizon Globe model. It sits on a tilted axis, and it has a platform (horizon plate) for the observer and four “rings.” The ecliptic ring is printed with the months, zodiac signs, and solstices. The sun, moon, and planets will be affixed to this ring. A wooden star at the tip of the slanted globe represents the North Star. While constellation discs are likely to remain in place, students will frequently move the sun, moon, and planets.

Students begin by attaching the sun in different positions and then rotating the globe to see how the sun moves across the sky. They learn to judge the time of day by the angle of the sun. Of course, since the sun does not actually circle the earth, this is only a representation of how the sun appears from the perspective of a northern hemisphere observer on Earth. The same applies to the moon, planets and stars—the Horizon Globe teaches from one observer’s perspective to keep it simple enough for beginning astronomers to understand.

The moon is added next. Students learn about phases of the moon and how it moves in relation to the sun. With four different types of moons to be mounted on the ecliptic ring, students should become very familiar with the moon, its movement, and its varying appearances.

Colored plastic discs can be added to represent the four most visible planets from Earth: Venus, Mars, Jupiter, and Saturn. The book also covers seasons, particularly in relation to the angle of the sun and the position of the moon. At the back of the book are pages of Moon and Planet Calendars for 2017 through 2030 along with a guide for reading them. The calendars show where planets are on the 21st of each month.

The Horizon Globe is relatively sturdy, but you still want to handle it carefully since it is breakable and some pieces can come loose. While you might introduce concepts at beginning levels to younger students, the depth of information in the book is more appropriate for teens.

Of course, to really capitalize upon what they learn in this course, students need to make their own actual observations as much as possible. They can generally track the sun and moon, but tracking constellations and planets depends more on the weather and visibility. I know that the bright lights in the suburbs where we live make it difficult to see many of the stars that can be clearly seen from other areas from other areas with less light pollution.

The creators of Horizon Globe plan to publish a follow-up guide for finding stars and constellations. In the meantime, at the back of the book they recommend other resources for students who want to learn more.