The Crossroads of Science and Faith: Astronomy Through a Christian Worldview 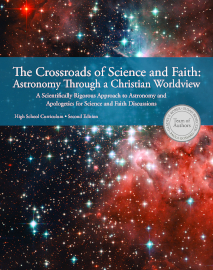 The astronomy textbook, Crossroads of Science and Faith: Astronomy Through a Christian Worldview, second edition, is a one-year, high-school-level astronomy course for Christians. The authors are all professional astronomers who are Christians. They explain their motivation in the book’s introduction, “Our desire is to provide a resource for Christian school and home school communities that inspires students with current knowledge about our amazing Universe, teaches them about the nature of scientific inquiry, and strengthens their faith in the Creator.”

To that end, the book is divided into two parts. Part I, “Introduction to Science & Faith Issues,” provides essential material that applies to all areas of science, not just astronomy. Updated in 2022, the text includes the latest scientific information.

Developing a Christian worldview is such an important goal of the authors that the first four chapters deal with worldviews specifically. Worldview-oriented material is also incorporated thoroughly throughout the course.

The relationship between science and faith is included in Part I, with the authors proposing that there are four different views that people hold: conflict, independence, dialogue, and integration. They explain the pros and cons of each position while advocating for the dialogue and the integration of viewpoints.

Regarding the age of the earth, they assume that this is a secondary faith issue rather than a primary element of one’s theology, a position with which many young-earth Christians might disagree. The text supports an old age for the universe based on scientific evidence. While the course briefly presents various viewpoints in this regard, it is designed to bring students to an agreement with an age of billions of years. A series of questions within the chapter four exercises attempts to sway students in that direction. Other comments elsewhere do so as well.

Further along in the introduction, the authors say, “We also hope that this textbook will correct many misconceptions about science and scientific inquiry that are common in some Christian circles. This curriculum is designed to help students to face a secular environment with confidence, simultaneously strengthening their faith and eliminating the idea that science and Christian faith are necessarily at odds with each other.” Two appendices deal further with conflicting Christian views in regard to the origin debate and the age of the earth, but again with a slant toward the authors’ views.

Full-page interviews with highly-regarded scientists are inserted throughout the book. These are designed largely to show that scientists can be faithful Christians and vice versa.

Part I also addresses the nature of science and scientific inquiry. Chapter 5, “Tips and Tools for Sound Argument,” is unusual within typical science textbooks, but it is appropriate here since the course itself is an apologetic for a Christian view of science, and astronomy in particular.

Part II begins again with Chapter 1 and continues through Chapter 24. It is like there are two separate books in one. The book has more than 500 pages to accommodate so much information! In fact, the authors suggest teaching the chapters in Part I simultaneously with those in Part II. If you do so, I would consider alternating those chapters for the first ten weeks of the course since Part I information is so foundational.

Part II presents the astronomy course itself. It begins with the history of astronomy, told largely through the stories of influential astronomers such as Copernicus, Brahe, Galileo, and Newton. Historical conflicts between faith and science are mentioned, but are used primarily to illustrate the fact that even intelligent Christians can be wrong in their scientific beliefs. The authors encourage the search for truth since they believe that the pursuit of truth will never lead to evidence that denies the reality of God. They point out that both science and theology are human interpretations of God’s revelation through nature and Scripture. Apparent conflicts between science and faith can originate from mistaken interpretations of either nature or Scripture.

The course continues in a logical fashion through the study of the sky, telescopes, light, the solar system, our sun, planets and “small bodies” in our solar system, extrasolar planets, stars, galaxies, and the structure of the universe. Part II concludes with three chapters that deal with scientific topics that have metaphysical implications: “Cosmology,” “Life in the Universe,” and “A Universe Fine-Tuned for Life.” The sections dealing with the theological issues arising from scientific questions and evidence are labeled “Science & Faith," although” the entire final chapter is almost entirely devoted to presenting the evidence for the design of the universe. The authors present the evidence without expanding into a specific defense for the existence of God until the final "Science & Faith" section. While the astronomical arguments for the existence of God can be very complex and hard to follow, the authors of this text present them in a manner that most teens should be able to follow.

The text itself is a large, soft-cover book. Pages are printed in full color with lots of illustrations. As large as the text already is, I wish that it also had an index.

The PDF Answers to Exercises book serves as the answer key. There is no separate teacher’s manual since the textbook itself is designed for independent study. While students should read through the text on their own and work through the regular exercises, they need to discuss "Extended Response" and "Exercises on Science & Faith" questions. The discussion sessions are ideal for group classes, but discussion with a parent will suffice if the parent has read the material. Suggested responses to discussion questions are included in Answers to Exercises. There are no tests for the course.

The authors recommend the course for junior and senior levels in high school, although I think it might be used earlier. The course should qualify for a full credit, but there is no lab component. The course includes plenty of math applications, but I didn’t spot any math that most freshmen shouldn’t be able to handle. Prior study of basic concepts across a range of scientific areas—earth and space science, chemistry, and physics—is really essential, whether in junior high or high school. Otherwise, students will likely be overwhelmed by the amount of unfamiliar scientific information and vocabulary.

In The Crossroads of Science and Faith: Astronomy Through a Christian Worldview, solid science content reflecting the latest discoveries (as of 2022) provides students with an excellent education in astronomy. In addition, the authors’ passion for both astronomy and their Christian faith shine throughout this text. You can’t read it without picking up on their sense of awe in the presence of God’s handiwork. For those who agree with the text’s strong support of an old universe, using Astronomy Through a Christian Worldview will lay the groundwork in scientific thinking and Christian worldview that students can apply in college and beyond. Those skeptical of its approach to the age of the universe might want to encourage students to evaluate and challenge the authors' viewpoint.