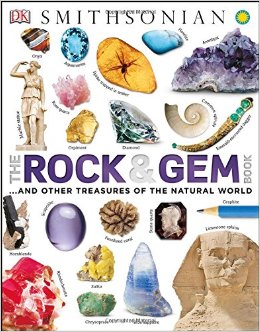 The Rock & Gem Book is yet another gorgeous DK book, loaded with fascinating illustrations. This is a 210-page hardcover book that offers much more than you would expect from the title. After a brief introduction on the formation of the earth and the cyclical creation of various types of rocks, the book is divided into five sections on Rocks, Minerals and Gems, Fossils, Shells, and Famous Treasures. Surprisingly, the last three sections comprise almost half of the book.

Images dominate each page while the amount of text is limited. As usual with DK books, subtopics within each section each have a two-page spread.  The publisher has employed a unique approach with the text, bolding the first paragraph on most two-page spreads then using bold only on key terms through the rest of the text. That bolded paragraph generally has some broad information that should be understandable for both children and adults. The following information gets much more technical and details. For example, the section on pyrite begins with the paragraph: “Pyrite is a bright and shiny pretender. If you are not careful, it will trick you into thinking that you have struck gold. It contains nothing of value, except, perhaps, some iron.” You could read that to a preschooler, and they would be delighted with the concept of someone getting tricked by pyrite.

In contrast, further on in the text it continues, “As well as cubes and octahedrons (eight-faced shapes), pyrite forms dodecahedron crystals with 12 faces. It also forms nodules, some of which have radiating crystals inside. Pyrite is used to make sulfuric acid, and because it makes sparks when struck, it was also used to ignite gunpowder in wheel-lock rifles” (pp. 62-63). You can see how many children might quickly get lost in the unfamiliar vocabulary.

While nothing in the book verifies this, it seems to me that you might do best reading only that first paragraph with your children, then allow them to explore the images. They’ll be amazed, they will have learned a snippet of information, and they won’t be overwhelmed. If you hit a topic where they are ready to learn more, just read on.

I love the way the author combines images of the rocks and minerals themselves with a few images of things made from them or natural formations containing them. For example, for sandstone on pages 34-35, we see images of Arches National Park in Utah; the Palace of the Winds in Jaipur, India; a sandstone grinding stone; a Buddha statue; and a sandstone bowl.

From time to time, a two-page spread is taken up with a single image of a fabulous natural wonder such as the Rainbow Mountains in China on pages 36-37. When I turned to these pages, I just had to go research the Rainbow Mountains further on the Internet since I had never before heard of this amazingly colorful geologic wonder caused by stratified mineral deposits. (Check it out for yourself on Wikipedia.)

The section on Fossils covers all types of fossils including sea creatures, plants, trees, land animals, marine reptiles, flying reptiles, all sorts of dinosaurs, and mammals.

The “Shells” section of the book is surprisingly large given the title of the book. While there is some information on the various broad categories of mollusks as living creatures, much attention is given to the huge variety within particular types. There are two-page spreads showing only “whelks and their relatives,” “conches and cowries,” and other such narrow groups. The shells are beautiful and much of the information is interesting, but it might be too much on one topic.

In contrast, the final section on “Famous Treasures” relates the stories of eight historical treasures that involve gold, gems, or other topics covered in this book. The Jade Princess from ancient China, a Viking horde of silver discovered in England, and the Royal Treasure from ancient Ur are among them.

The book concludes with a glossary, an index, and a page explaining briefly how to identify minerals.

The Rock & Gem Book was written from a secular perspective including evolutionary assumptions. While this is especially evident in the section on fossils, it is apparent throughout the book.

The Rock & Gem Book is the sort of book you might use as an introduction to study of rocks, minerals, gems, fossils, or shells. However, I can see it more likely used as a browsing book. Just set it out and see if you and your children don’t start looking through it just because it’s so interesting.