The Mystery of Metal 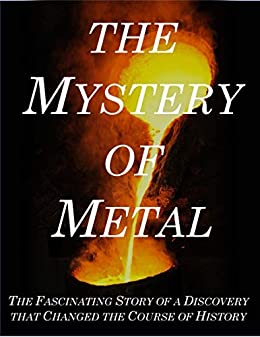 The Mystery of Metal, available only as a Kindle® book, is the first of a planned series of books for middle school students that teaches science through history, storytelling, and pictures. This particular book is designed to be an introduction to chemistry. The book begins:

More than 10,000 years ago, people living in Mesopotamia, a land near Egypt, found a rock that was so special that they believed it had magical powers. No matter how hard they pounded it, it wouldn’t break. Instead, it became flatter and, if they pounded it for long enough, became as thin as the bark of a tree and could be bent with one’s bare hands.

Nothing else was like this special rock. Dirt was also soft, but it broke apart easily. Tree branches could also be bent, but they sprang back to their original shape.

Grabbing students’ attention from the start, author Eric Grannis reveals that the substance the Mesopotamians had discovered was copper. Using both pictures and text, Grannis tells about the earliest objects made from copper, then transitions to modern-day usages in wires, pipes, and the Statue of Liberty. Chemistry concepts are taught as part of the story of the development of uses for copper. Students learn how copper can be derived from malachite through a refining process, how oxygen combines with copper to make it turn green, the basics of atomic structure and bonds, chemical reactions caused by heat, the method Egyptians used to increase the heat of a fire enough for it to melt metals such as copper, and how people figured out that mixing tin with copper created a harder substance called bronze.

The next section is about iron, a substance the Egyptians called “the metal from heaven,” since they had only found usable iron in meteorites. Even though iron ore is abundant on earth, the smelting process for it would be a later discovery. The lengthy discussion of the iron smelting process teaches some significant chemistry concepts, such as ways that valence electrons form bonds.

Grannis explains that when blacksmiths add carbon dust as they hammer wrought iron, the process hardens the iron into steel. Students also learn how the Chinese learned to make charcoal (for carbon) and use a blast furnace to smelt iron sometime in the first century.

Students also learn that it wasn’t until the thirteenth century that Europeans figured out how to make blast furnaces. That discovery eventually helped fuel the industrial revolution of the eighteenth century.

A process for purifying aluminum wasn’t developed until the nineteenth century. Grannis explains how this light metal quickly became popular because of its unique properties. He also explains that while people have known about gold for much longer than aluminum, gold is much rarer and more valuable.

The diagrams, photos, and other types of illustrations really add to this book. Students can see how each of the different processes used in the past worked, how the various metals were used then, and how they are used now. This is a great way to introduce chemistry since the scientific concepts are all taught within a meaningful and interesting context that students can understand.

The Mystery of Metal: The Fascinating Story of a Discovery that Changed the Course of History