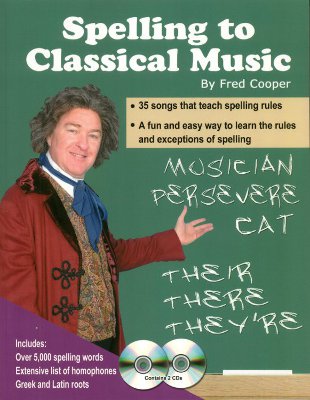 Fred and Sarah Cooper have been producing and distributing products that use music to teach various subject areas for more than 20 years. They sell products produced by others, but they have created some of their own to meet particular needs. Spelling is one of those areas where music is rarely employed to help students learn, yet it might prove helpful for those who learn better when information is set to music.

Spelling to Classical Music stretches the definition of classical music to include tunes from light opera by Sir Arthur Sullivan, John Phillip Sousa marches, and polkas alongside music by Bach, Tchaikovsky, Mozart, Mendelssohn, and many others. In my opinion, this unusual mixture is a very positive feature.

Spelling to Classical Music consists of a 158-page soft cover book with two CDs featuring 35 songs in all. Songs were written by Fred Cooper and are beautifully sung by his daughter-in-law Amy Cooper. Lyrics for each song focus on a particular spelling rule while also addressing exceptions. In addition, there are songs on the rules for creating plurals, for adding prefixes and suffixes, for distinguishing homophones, and for syllabication. Charts of homophones and Greek and Latin roots (with their meanings and derivatives) are at the back of the book.

The book begins with a few pages for parents and teachers about basic methods for teaching spelling and some recommended resources. After that, each “lesson” begins with the lyrics for the song. Songs are complex, so students would do well to follow along in the book while listening to a song. Some of the songs are singable by students but not all; however, students are more likely to just listen rather than sing along. Given the often complex subject matter of the songs and the difficulty of fitting them to each musical setting, some songs flow well while a few are a little awkward and strained. If you don’t like a particular song, you can always just use the text and skip the recording. In each lesson, after the presentation of the complete song, lyrics are broken down into sections for more concentrated teaching. For example, “The Sounds of the Letter C” song first addresses the hard sound of c with the first two stanzas. This section of the song is reprinted with a brief explanation and a list of exemplary words. The next stanza teaches the soft sound of c, again followed by a brief explanation and list of exemplary words. The final stanza explains that c is often included with another consonant to create blends. The lesson then presents words with ch, cl, and cr blends. Students might work on only one section per day or even per week, possibly taking a spelling test based on each list. (Lists are often too lengthy to test on every word so you would probably select representative words for a test.) At the end of many, but not all, lessons there are randomized lists of words from the various sections of the lesson. These lists are divided into groups of 20 words each to make it easier to use them for spelling tests.

Songs cover the common phonograms for vowels and a few consonants as well as phonograms such as air, aw, ul, er, eer, oi, or, oo, and ow. There are over 5,000 words covered in the course.

Spelling to Classical Music might be best used as a review or reteaching resource with older students, perhaps sixth grade through adult levels. While you can use it with younger students, much of the vocabulary (e.g., “admission, aggression, commission, gherkin, rheumatic,”) is beyond the primary grades and might even be challenging for fourth and fifth graders. You could use it alongside another spelling program, selecting songs and lessons to use as supplements to your core program, even if some of the vocabulary is above a student’s level. You might use only the songs in such instances.

A teen could work with the course on his or her own, but younger students will need direction as to how and when to use it.