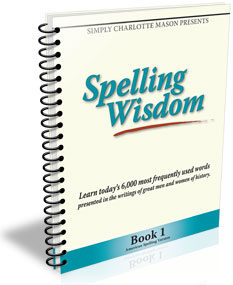 Charlotte Mason taught spelling in the context of reading and writing rather than as an isolated subject. She used the method of “prepared dictation,” which Sonya Shafer has adopted for her Spelling Wisdom series. The series consists of five books that cover grades three through twelve. Each book will be used for about two years or longer.

The bulk of each Spelling Wisdom book consists of dictation passages, many of which are taken from literary works by famous authors such as Charles Dickens, Daniel DeFoe, Winston Churchill, and Jane Austen. Literary works include excerpts from novels, autobiographies, poems, speeches, Psalms, readers, and letters—almost all of these are from older works in the public domain. Shafer has added a few original passages so as to include newer words such as “computer” and “infrastructure,” and she has updated spelling and punctuation in some instances to match modern usage. More than 12,500 different words are used in the Spelling Wisdom series. These include the 6,000 most-frequently-used words in the English language. An index in the back of each book shows in which exercise each word appears in the book, so you can select a particular passage if there is a word a student needs to learn.

Students might use one or two passages per week. Passages become increasingly difficult and lengthier from book to book as well as within each book. Book 1 is suitable for grades three through five, Book 2 for grades five through seven, Book 3 for grades seven through nine, Book 4 for grades nine through eleven, and Book 5 for grades eleven and twelve.

Students begin each lesson by studying the passage with a parent or teacher to identify words likely to be challenging. Students then study the challenging words by copying them, visually memorizing them, and practicing writing them. This process might take a short time or several days. Once students are confident that they can write every word accurately, they will write the passage as the parent or teacher dictates it. Any misspelled words are restudied.

Literary passages often feature lengthier sentences and uncommon phrasing that might be unfamiliar to students who have not been exposed to literature of past centuries. This probably adds an extra dimension of difficulty as students listen to, recall, and write the passages from dictation. You might do well to have your children read some of the referenced literary works apart from Spelling Wisdom exercises so that they become more familiar with the language.

Christian works are referenced often enough that the series really appeals primarily to a Christian audience.

Brief instructions are at the front of each book. You can view these pages as part of a free downloadable sample file on the publisher’s website. A parent or teacher needs to be involved in much of the lesson, although students might study words on their own. Shafer cautions against allowing a student to write a word incorrectly without immediately rewriting it correctly; you can see that this would require supervision most of the time.

The books are not consumable, and permission is given to copy pages for use by those in your immediate household. Generally, both parent and student should be able to work directly from a single book.