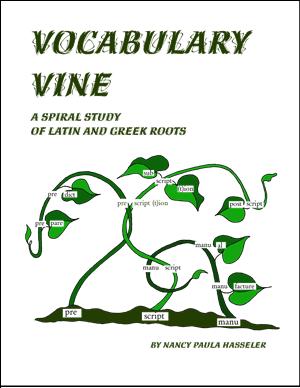 Vocabulary Vine directs students through a one-year study of Latin and Greek roots. While it has goals similar to resources such as English from the Roots Up and Vocabulary from Classical Roots, its methods are different.

The author stresses three distinctives of Vocabulary Vine. First, the words taught and used as examples are familiar rather than simply chosen because they fit. For example, "thermometer" is used rather than "diathermy" as examples for "thermo." Second, the program uses a spiral approach to some extent. Words introduced as example words with the root being studied that day, usually include another root that will be studied within the next few days. This helps students to review and make connections. Finally, example words are selected so that their meaning fairly obviously helps reinforce the definition of the root.

Cards are filed in a box alphabetically for easy review. After the first week of creating cards and studying the words, students can begin to play some of the twelve games described in Vocabulary Vine. (Some can be played alone, but most will need at least the parent, but preferably another student, to play.) This actually provides both review and a form of assessment for parents, although the games are optional.

Nancy Hasseler has also created Bingo & Game Tile Set (suggested price $6.50), an inexpensive bingo style game with roots to be matched with definitions. The tiles (printed on cardstock) can also be used with some of the other games described in the book.

(You might also be interested in Science Roots by the same author. Science Roots is a companion for high school biology, and is keyed explicitly to Apologia's Exploring Creation with Biology.)