This is one of my Top Picks
BookShark Home Education 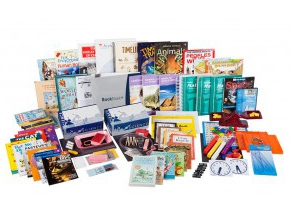 When I first spotted BookShark at a homeschool conference it looked very familiar to me—lots of real books for each level, parent guides to coordinate learning, and grid-charts showing what pages are to be read in each book each day. I thought it looked very similar to Sonlight's curriculum. It turns out that BookShark is a spin off from the owners of Sonlight, operating as a separate company. Since both programs are so similar to one another, read my review of Sonlight for a more comprehensive explanation of how both programs work. BookShark is available for pre-kindergarten through tenth grade.

BookShark's programs are a non-religious version of Sonlight's programs. Fifth grade world history probably reflects this more than most levels. Gone are the stories of missionaries and a particular emphasis on heroes of the Protestant faith. In their place are stories of Nelson Mandela, Gandhi, and Mother Teresa.

There are also some other differences. Like Sonlight, BookShark offers your choice of complete grade-level packages or packages that cover one or more subject areas. However, the packages within grade levels are a little different. While Sonlight's Core packages encompass history, Bible, language arts, and reading, BookShark offers "Reading with History" packages for each grade level. Reading with History packages include readers, but the bulk of language arts instruction is in a separate package. BookShark has made significant improvements to the language arts program over Sonlight's. Specifically, they have added weekly overviews, daily lesson plan scripts, and rubrics to give parents more guidance for teaching and evaluating student work.

In science, resources with a Christian worldview have been removed. For example, in Sonlight fifth graders watch the DVD Unlocking the Mystery of Life that presents an "intelligent design" view, but that DVD is not included in BookShark's fifth grade science. Sonlight's sixth through eighth grade science courses spend even more time on the origins (creation/evolution) debate, so BookShark replaces that material with more coverage of chemistry, physics, and other topics.

In choosing to use real books, both Sonlight and BookShark have to deal with content in some of those books that might be objectionable to some homeschoolers. However, such issues are generally pointed out in the instructor's guides in advance.

Despite differences in the programs, the educational approach and learning methods are really the same in both Sonlight and BookShark. The essential difference is that BookShark now offers an option for those who want to experience a "Sonlight education" from a non-religious perspective.