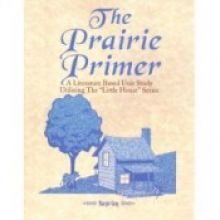 Primer might be slightly misleading in the title, since The Prairie Primer is more similar to a KONOS unit-study volume than any book with "primer" in the title. It differs in that it is more of a do-it-yourself unit-study approach than the aforementioned programs. (It reminds me somewhat of the original KONOS volume that was a fraction as big as the present volume.)

The Prairie Primer is one large, plastic-spiral-bound volume (or PDF) that accompanies the nine books in the Little House series. Each Little House book has one unit in The Primer, and it should take from one to two months to complete each. The learning level encompasses grades three through six, covering "...U.S. History in the 1800's, U.S. geography, science, language, practical living, health and safety, nutrition, music, and art. With the exception of a grammar, spelling and math program, The Primer is a well-rounded scholastic program" (quote from the Introduction). Specific topics covered within the curriculum are listed under subject area headings for all but writing and grammar, for which scope and sequence suggestions are broken down by grade levels.

Aside from the Little House books, The Primer and the Bible are the primary resources, but you also need reference resources (encyclopedia and library access). Daily lesson plans provide comprehension questions related to reading from the Little House book. Activity suggestions follow next to subject area headings. In most cases, the activity is outlined in general rather than in detail. For example, study bears and their hibernation patterns, habitats, and food; write a report on what you have learned. Since a number of the activities listed for any single day might be as involved as this example, you must pick a reasonable number of activities to accomplish rather than attempting to do them all. A planning guide at the beginning of each week's lessons lists topics for which you will need information, suggested reference resources for some of them, items needed, and field trip ideas. Space for your own planning notes is allowed. Although lesson plans are listed for each day, it might be more realistic to take two days for each so that you can fully develop some of the suggestions.

Scripture readings and principles are strongly integrated throughout the curriculum. At the end of the book are an appendix on motivational gifts and a list of resource sources.

The Prairie Primer could be overwhelming for the new home educator, but veterans who already know how they like to present lessons should appreciate the wealth of ideas assembled in this volume. (The publisher tells me they have gotten positive feedback from first-time homeschoolers using The Prairie Primer, as well as comments from veterans who found it less overwhelming than other unit studies.) The fact that the cost is significantly less than the other major unit studies is likely to give it extra appeal.

The publisher sells the Primer by itself, but they also sell packages that include helpful extras such as the books Laura Ingalls Wilder Country and The Little House Cookbook. Check the website for sample pages from The Prairie Primer and information on packages.

While most of the Binder-Builder Lapbook consists of pages to cut, paste, and write on to create the notebook, it also includes extras such as a reading schedule for each Little House book and lists of virtual field trips and websites that relate to each books.

It should be a big help to parents since it saves having to create everything from scratch.