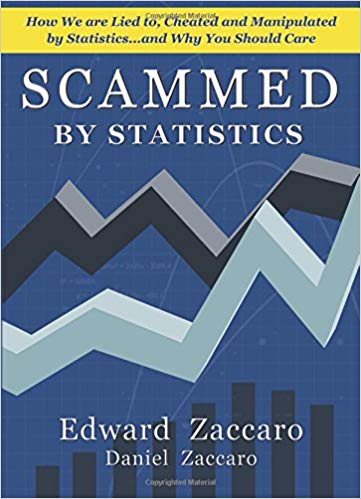 I’ve long been a fan of the book How to Lie with Statistics by Darrell Huff because it brilliantly, and often humorously, exposes how statistics and mathematics can be misused to influence behavior. However, that book was written in 1954, and its examples have become increasingly out of date for younger audiences. Scammed by Statistics by Edward and Daniel Zaccaro, written in 2010, is the best replacement that I have found for How To Lie with Statistics.

In Scammed by Statistics, the Zaccaros show many ways that statistics, math, and graphs have been used to misrepresent reality─whether intentionally or not. Widely used in advertising, politics, the medical industry, education, and other arenas, statistics are too often used to influence viewpoints and behaviors in support of goals that might not be in the best interests of those influenced.

The goal of Scammed by Statistics is to awaken readers to the falsehoods, manipulations, and errors that can influence our thoughts and decisions and can even cost lives. And it’s not just about statistics. A number of examples in the book deal with the pharmaceutical industry. In at least a few instances that they cite, fraudulent or misreported studies allowed drugs to be sold even when the companies knew that the drugs did not perform as advertised or have even caused deaths. The Zaccaros discuss other potential problems with studies─problems such as comparing non-equivalent groups and the possible effect of the source of funding on a study’s outcomes and how those outcomes are reported.

Other examples in the book deal with advertising and media influence. For example, in Chapter Seven, they dissect a Chevy Volt ad that bragged that the car got 230 miles per gallon. They show how that number can only be achieved by cherry-picking possible trips. The first 40 miles of any trip can rely solely on the battery and use no gas. Once it switches to gas, the car gets about 50 mpg. The Zaccaros show that only when the car is driven exactly 51 miles can the math support the claim of 230 mpg, but this isn’t an average. The actual average is 54 mpg─176 mpg fewer than advertised!

Some of the examples are funny, like the one about our brains preferring to see patterns where they don’t exist. The Zaccaros relate the story (with illustrations) of an Italian musician who claimed to have found a musical score hidden in Leonardo Da Vinci’s painting of The Last Supper, with note placement indicated by “elements of the painting that have symbolic value in Christian theology” (p. 172).

Even though many of the examples in Scammed by Statistics were drawn from the era of 1980 through 2010, some of them already feel dated. Even so, it’s still much more up to date than How to Lie with Statistics.

Scammed by Statistics is a fun and relatively fast book to read. Even though it's 250 pages long, the fonts are large, and images and graphs take up a lot of space. Some potential readers might think the book is only for those who are already familiar with the field of statistics. On the contrary, the book serves as a good introduction to the uses of statistics and does not require advanced mathematical knowledge. Junior high students should be able to read it with no problem. It also serves as an introduction to logical fallacies. All of this makes Scammed by Statistics a good resource to use as part of an introductory course in critical thinking or logic.

Scammed By Statistics: How we are Lied to, Cheated and Manipulated by Statistics...and why you should care