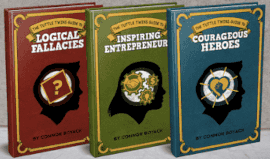 The three Tuttle Twins guidebooks are great for ages 11 and up, especially those who might be a little too old for the original Tuttle Twins series by the same author. This series consists of two books titled Inspiring Entrepreneurs and Courageous Heroes that have short biographical sketches, and a third book titled Logical Fallacies.

As with the series for younger readers, author Connor Boyack’s goal is to advance belief in limited government, personal responsibility, and individual freedom–ideas generally supported by conservatives and libertarians.

Ranging from 174 to 246 pages in length, the guidebooks have much more text and fewer illustrations than the original Tuttle Twins books written for younger students. The books are printed in black and white and are only available in hardcover.

The Tuttle Twins, Ethan and Emily, are less visible in the guidebooks than in the original series. They show up in brief stories in Logical Fallacies, but in the two biographical books, the twins show up only at the beginning and end of each book. Their pictures show them being older than in the original books.

Logical Fallacies presents 24 logical fallacies, such as the strawman (misrepresenting your opponent’s position and arguing against that misrepresentation), the appeal to authority (using the opinion of an authority figure rather than logical arguments), and the sharpshooter (cherry picking data to prove cause and effect).

Each chapter addresses one fallacy, and all chapters follow a common layout. The first page is a cartoon image that depicts the fallacy in some way. The second page has a definition of the fallacy followed by two or three cartoon-strip drawings that illustrate the fallacy with the verbal arguments that people try to make. The cartoon-strips are helpful and often amusing. The next few pages explain the fallacy. To make it more concrete, this is followed by a section titled “An Example with Ethan and Emily.” Here, the Tuttle Twins are situated in a short vignette where the fallacy featured in the chapter comes into play. This vignette is followed by a section that explains what actually happened—how the fallacy caused faulty thinking. Each chapter concludes with a “Tuttle Twins Takeway” that tells readers some ways to avoid the fallacy themselves or to recognize and address it when used by others.

Fleshing out the explanatory information with the vignettes makes these lessons more effective and engaging to read. And the practical takeaways are very helpful.

The other two books, Inspiring Entrepreneurs and Courageous Heroes, share the same format. An image of the featured person is on the first page, and the rest of the chapter tells their story. Boyack stresses particular aspects of their stories in keeping with the theme of each book.

Inspiring Entrepreneurs is an interesting collection of 16 stories. A few stories are about well-known figures such as John Rockefeller, Elon Musk, Steve Jobs, and Walt Disney but the majority of the stories are about less well-known people such as Adi Dassler (founder of Adidas), Elijah McCoy ( a black inventor of the late 1800s who created a self-lubricating system for steam engines), Madam C.J. Walker (a black woman who created a beauty products marketing business that employed women in the early 1900s), and Magatte Wade (a Senegal native who is working to overcome onerous business regulations in her native country and to encourage entrepreneurship).

The stories of the entrepreneurs praise their innovation, perseverance, creativity, focus, and hard work. Some stories such as those about Elon Musk and Steve Jobs mention difficult aspects of their personalities, so the biographies do not paint all of these people as totally praiseworthy. Some stories discuss religious affiliations and motivations. For example, the story about Steve Jobs tells how his trip to India and adoption of Buddhism greatly influenced him, and the story about Rockefeller highlights his faith and church membership.

In Courageous Heroes, the stories of the heroes emphasize their courage in difficult situations, their stands against evil, and their challenges against the status quo. The stories again feature a mixture of well-known and lesser-known people. Among them are Corrie ten Boom, Harriet Tubman, Dietrich Bonhoeffer, Katherine Johnson, Prudence Crandall, Frederick Douglass, Edward Snowden, and Aleksandr Solzhenitsyn.

Logical Fallacies is designed to help students think clearly and present their cases convincingly, while Courageous Heroes and Inspiring Entrepreneurs were written to motivate students to do well and to inspire them to choose the path of courage, even when it’s difficult.