Timeline of Classics: Historical Context for the Good and Great Books 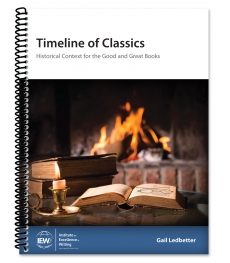 Timeline of Classics is a handy resource for parents interested in using real books—both the Great Books and Good Books—for home education. Following a historical chronology, it is essentially a lengthy chart showing written works as well as videos and audio recordings that fit each era. History and literature resources dominate, but there are also resources related to Christianity and a Christian worldview as well as plays and a few works on science, economics, philosophy, and other topics. As it gets into the modern era, there are also works reflecting popular culture such as the film Cheaper by the Dozen and the audio recording of Come On, Seabiscuit! The charts also include David Quine's World Views of the Western World series, each volume of which has its own list of required resources.

The religious perspective is decidedly Protestant, weighted toward Reformed Protestantism, although broader religious outlooks are supported with resources like Summa Theologica (St. Thomas Aquinas), The Imitation of Christ (Thomas a Kempis), and The Soul's Journey into God (St. Bonaventure). In addition to works by Martin Luther and John Calvin, resources such as Dangerous Journey, The Hawk that Dare Not Hunt by Day, The Light and the Glory, For Kirk and Covenant, The Heidelberg Catechism, The Westminster Standards, the World Views of the Western World series, and America's Providential History support a Protestant worldview.

Charts are presented in four columns listing "description or time period," title, author, and level. Levels are represented by E (elementary), M (middle school), and H (high school). Descriptions, when provided, are brief. They note key ideas or topics and/or the time period and locale.

Parents might use Timeline of Classics as a guide for selection of resources for a "real books" approach to learning or for supplementing studies for each time period. It will likely save you hours of research to find resources likely to work for you if your goal is to teach a conservative, Protestant biblical worldview. You might also use it as a record keeping tool, noting directly in the book when a student completes each resource.

The second edition of Timeline of the Classics has added a section at the beginning of the book, "Introduction to Reader Response Journaling." This valuable addition is actually about much more than journaling. It outlines a process for reading and journaling about books that can be quite extensive. It suggests using both Teaching the Classics: A Socratic Method for Literary Education and methods from Teaching Writing: Structure and Style. Following these guidelines, you could lead a Socratic discussion regarding a book that you have read with your children using methods from Teaching the Classics, and you can also have students create key word outlines then reconstruct their own narrative of the story using methods from Teaching Writing: Structure and Style. Journaling new vocabulary words and their definitions should also be part of the process. At the back of Timeline of the Classics is a sample Reader Response Journal for The Magician's Nephew by C.S. Lewis.

Timeline of Classics is available in print or digital editions with significant savings on the ebook. I would generally recommend the ebook version because it should be easier to search depending upon what device you are using as a reader. However, those who want to use it for record keeping might find it more practical to purchase the print version.

ebook - $19
Please consider clicking here to use my affiliate link to purchase directly from the publisher.