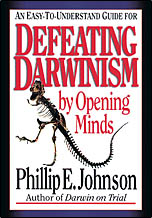 You should first read my reviews of two of Johnson's other books, Darwin on Trial and Reason in the Balance. This book is a condensed, easier-to-read version of both. Johnson deals with the ideas of truth, reason, and intelligent design as primary arguments against Darwinism. He also addresses the battle between relativism (postmodern thought) and Christianity (which denies relativism), the real conflict we face. Johnson believes that as scientific evidence disproving evolution continues to build, evolutionists will be forced to confront the fact that empirical evidence and their theories are in direct conflict. As Christians, we can encourage the opening of minds to confront the real issues involved in the battle over evolution.

In aiming for a younger, less-informed audience than he did with his other books, Johnson uses an e-mail letter from Emilio, a European university student, to draw out three key mistakes Christians and other theists make when discussing evolution. He also uses the context of the screenplay version of the Scopes Trial in the movie Inherit the Wind as a backdrop for his arguments throughout the book. He explores the use of media to control the message, the distortion of truth by the media, the arguments presented in the movie versus the true situation, the reversal of the Scopes trial situation that occurs today—schools being challenged for teaching evolution and creationists on the defensive side, and the arguments the public perceives and believes without logical analysis. This approach makes Defeating Darwinism an excellent introduction to intelligent design ideas as well as to Johnson's other works.

All high schoolers should be required to read this book! I can't say this strongly enough.