What Does the Bible Say About That? 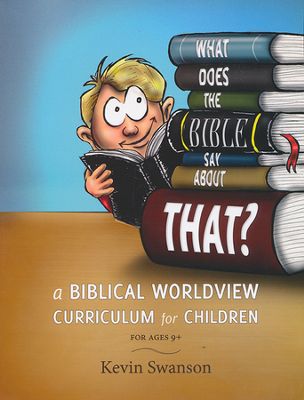 What Does the Bible Say About That? is a worldview curriculum written by Kevin Swanson, a homeschooling father, pastor, author and radio host. He suggests this course for children at least nine years of age up through about age 13. However, I would suggest a starting age of at least 11 since Swanson presents ideas for which younger children probably lack enough familiarity to reason through what he is saying. The course has ten chapters, and an answer key is at the back of the book. You don’t need anything else, although students might want to look up some of the biblical references that are not written out within the text.

While children will be able to work through lessons independently, I highly recommend that parents and children read and discuss them together. Each lesson is taught in very easy to understand language. As you would expect, lessons include frequent biblical references since this course is trying to instill a biblically-based worldview. Blackline cartoon illustrations and graphics coupled with a large, easy-to-read font make the book visually appealing.

The text for some lessons is lengthier than for others, so the time required for each lesson will vary. Nevertheless, most students should be able to read a lesson in one or two days. Lessons are followed by a review of the key Bible verses, a series of questions to answer, and a vocabulary matching exercise. Some lessons have one additional workbook activity. There are from nine to nineteen questions at the end of each lesson. Some questions require just a word or two while others might require one or two sentences. So time required for questions will vary. The entire course can easily be completed in one semester. Swanson suggests giving students credit for social studies, but the course might better fit as a religion or Bible course.

Swanson writes from a Protestant religious view and from a limited government political view. While he advocates homeschooling, he goes even further in this book to explain why parents should not send their children to government schools (p.99).

Swanson develops the course in a logical fashion. He begins with a lesson on truth and knowledge, explaining that the Bible is our only consistently reliable source of truth. The next lesson addresses the origin of everything, the nature of God, and reality. (He actually makes this much simpler than it sounds by, for example, contrasting God’s sovereignty with man’s efforts to be sovereign, using the story of Nebuchadnezzar as an illustration.)

From there he continues with lessons on ethics (How do we know what is right and what is wrong?), the nature of man (including the Fall), and spheres of government.

As Swanson explains, each sphere of government—family, church, and civil government—has its own God-given rights and responsibilities. In the United States (as well as in other countries) government has encroached on other spheres. In return, individuals, communities, families, and the church have abdicated from some of their responsibilities such as families educating their own children and extended families and churches caring for elderly widows. He particularly focuses upon the destruction of the family that has occurred as a consequence.

While Swanson mentions that other religious worldviews exist, he doesn’t contrast a biblical worldview against a number of them as we find in worldview programs for older students. Instead, he simplifies most of his arguments to a contrast between secular humanism and biblical Christianity, and this is the contrast that is most important.

Some readers will find some of Swanson’s ideas challenging, and the last three lessons on “The Civil Government” (which is primarily about bad civil government), “Good Civil Government,” and “Good Law” will almost certainly challenge the beliefs of some parents. I highly recommend that even if children read the rest of the lessons on their own, that parents read these chapters with them and discuss any ideas you find controversial. For example, Swanson says on page 148 that “the most important law of all” is capital punishment for murder. On page 152, he says that “government should not take more than one-tenth of the money that we earn,” and that “civil government should not tax inheritance or people’s houses.” His positions on the Federal Reserve and foreign policy might likewise offer hot discussion topics.

Swanson doesn’t offer a great deal of support for many of his positions or statements, but presenting deeper arguments could be overwhelming for children in middle school and junior high. Some young people might have deeper questions, in which case, parents should pursue topics in greater depth aside from the course.

Whether or not you agree with everything in this course, it certainly provides an interesting foundation for worldview study.

What Does the Bible Say About That?