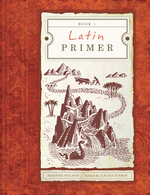 Children as young as third grade can begin their study of Latin with Martha Wilson’s Latin Primer series. This is serious Latin that teaches students Latin vocabulary, pronunciation, grammar, and paradigms as well as many English words that are derived from Latin. Students complete simple translations in the first book, mostly from Latin into English, but they gradually learn to translate lengthier sentences as well as sentences from English into Latin.

While Book 1 has lessons for 27 weeks, Books 2 and 3 have lessons for 32 weeks. Four or more cumulative reviews are included in each course along with quarterly tests.

Courses follow a common layout for weekly lessons except for review and test weeks. New Latin words are introduced—typically 15 words per lesson for the first two courses and 20 words per lesson for Book 3. The additional words in Book 3 result in a larger textbook and lengthier lessons.

After new vocabulary has been introduced, students learn about English derivatives of the Latin words. They should write the derivatives in the designated section of their student workbook.

For most weeks there is a new chant to learn that teaches one of the paradigms such as the conjugation of a verb or the declension of a noun. These are presented in charts showing both Latin and the English translations. (While students memorize a conjugation for only one tense at a time, they eventually learn all six tenses.) Daily practice of the chants is important for memorization. At this stage, children will not learn all of the grammatical usages for words memorized through chants.

Most weeks, students will also learn a Latin quotation. They will memorize these and copy them into a section in their workbook.

A worksheet in the student workbook has exercises to reinforce and review what students have been taught. Weekly quizzes both reinforce and check student mastery of the material. Student books include the quizzes, but you can also print out copies from the publisher’s website. Quarterly tests, likewise, are included in student workbooks but can be printed out if you prefer that students take tests without their book.

The amount of time required will vary from day to day. Books 2 and 3 include suggestions for optional games you might use with students if you have a group class, although Vincō, a bingo-type game, might be used with only one or two students.

The program is challenging, so it is okay if you want to wait until fourth or fifth grade to begin Book 1. To give you an idea of the level of work, Book 1 teaches about 300 Latin words plus the paradigms for first and second declension nouns and first and second conjugation verbs (in six tenses). The first test asks students to translate 36 Latin nouns into English, four English words into Latin, and six Latin verbs into English. They have to identify the stems for four Latin words. They identify definitions of a few of the derivatives they have learned. They write the English translations for the three Latin quotations they have learned, and they complete six paradigm charts with both Latin and English.

The Latin Primer series targets children in the middle-elementary grades based on Dorothy Sayers’ idea that children at these ages learn best through memorization. Even though children might begin the series as early as third grade, they should be usable for students up through eighth grade. Even though this series requires some diligent work, the memorization which plays a major role should be manageable.

The courses build upon one another, so students with little or no knowledge of Latin should begin with Book 1. Book 2 adds third and fourth declension nouns and some third conjugation verbs while the third course adds fifth declension nouns as well as verbs from the third and fourth conjugations. Of course, there are other parts of speech taught, but this gives you an idea of the progression of the courses.

Courses have some Christian material. However, most of the content is much like that of other beginning Latin courses that draw upon classically-oriented material with sentences translated into English such as, “The village was preparing” and “The troops will attack” (from the week 16 quiz for Book 1).

Teacher’s editions are essential. In addition to explanatory material at the beginning of each book, they contain teaching notes for each lesson plus the content of student lessons, quizzes, tests, and answer keys. Charts and a glossary at the back of each book should also prove helpful. Lessons should take minimal preparation time but they do need to be presented and practiced with students.

Latin Primer courses, most now in their fourth editions, are much easier to use than earlier editions. There is more explanatory material for the teacher and thoroughly developed lesson plans that will both save the teacher time and make it easy for students to know what they are to do.

Students who complete all three of these courses will probably have covered material equivalent to at least a first-year, high-school-level Latin course.