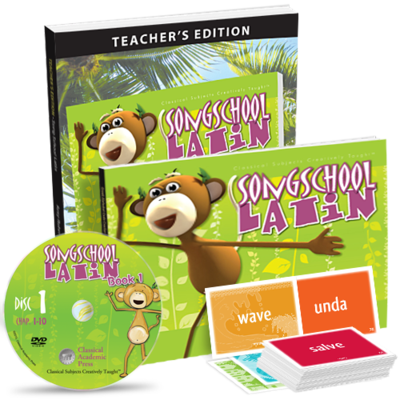 Song School Latin, a two-year program, is published by the same folks that publish the Latin for Children series. Song School Latin, with courses subtitled Book 1 and Book 2, serves best as a precursor to Latin for Children although it will work as an introductory program before most grammatically-based Latin programs. Since the lessons expect children to be able to read and write at about first-grade level, the program is best for grades one through three.

Songs play a major role in every lesson as you might guess from the title. Most songs and some of the other lesson material use diglot weaves where Latin and English words are mixed so that children easily grasp the meaning of the Latin words. Songs are sung by a man and woman with a variety of styles that are easily copied by children. Tunes are often those already familiar to children such as "My Bonnie Lies over the Ocean."

Song School Latin essentially uses a conversational rather than a grammatical approach, although a few grammatical concepts are introduced when needed. Teaching notes in the teacher's editions sometimes suggest optional grammatical explanations.

Lessons often include fables and fairy tales such as "The Three Little Pigs" and "The Tortoise and the Hare," and some lessons use Bible stories such as the announcement of the birth of Jesus to the shepherds and parables.

Connections from Latin words to English expand children's vocabulary and are presented in a way that should pique their interest. Likewise, a few famous Latin sayings are introduced such as "et cetera" and "mea culpa."

Lessons direct children to trace letters, copy words, circle the correct word, match columns of pictures and words, draw, color and cut out items from workbook pages, and fill-in-the-blanks. All of this is very age-appropriate activity. Workbook pages are printed in black-and-white, but they are very attractively illustrated and well-laid out in a format that should appeal to children. The teacher's edition includes reproducible activity sheets, one for each lesson. These include word searches, crossword puzzles, drawing, fill-in-the-blanks activities, matching, circling, and unscrambling letters to make words.

The 31 lessons in Book 1 and 32 in Book 2 should be spread out over a semester or a year depending upon the age of the student and the time available. Taking a week for each lesson—practicing vocabulary in practical situations throughout the day and listening to and singing the songs—will be the best way for children to really absorb the material.

While Song School Latin needs to be taught, there is really no lesson prep required other than identifying the correct track on the CD. Parents need no Latin background! To make it even easier and more effective, Classcial Academic Press has an optional set of instructional DVDs as well as a streaming option. The videos first offer you the choice of either classical or ecclesiastical pronunciation. Then you select the lesson that you are working on and watch presentations that last about 10 minutes. Presentations begin with the magistra (female teacher) chatting about the new vocabulary, usually in a setting where the vocabulary words identify the appropriate objects. For example, she stands at her front door to talk about "casa, porta," and "fenestra"—house, door, and window. Animated stories featuring Simeon the Monkey again incorporate vocabulary words. Then the magister (male teacher) helps students explore the "derivative river" by presenting English derivatives from the lesson's vocabulary words as well as occasional words in other languages also derived from those same Latin words. While the DVDs or streamed videos are optional, I highly recommend them.

Another optional product is the Latin Monkey Match Flashcard Game with different sets for Book 1 and Book 2. These are sets of more than 200 cards that are color-coded in four colors for use with each quarter of Song School Latin. Cards have words and phrases (with translation in small print at the bottom) in either English or Latin. While they can be used as simple flashcards, instructions are included for Memory, Go Fish!, and Banana Peel (similar to Old Maid) games.

You can purchase all components individually. The publisher offers a complete bundle of all of the items described above at a discounted price.

Overall this course is a great way to introduce both student and parent to the study of Latin.

You might want to check out the ready-made lesson plans from Homeschool Planet that are available for Song School Latin.