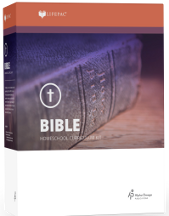 Alpha Omega LIFEPAC materials are unlike typical school textbooks in a number of ways. Children are placed at the appropriate starting point in each subject area in the program, and they work sequentially through a number of full-color workbooks, called LIFEPACS, as they master the material in each one. LIFEPACs are called a “mastery” program since students are not supposed to move on to the next LIFEPAC until they have mastered the previous one.

The LIFEPAC workbooks each contain instruction, information, questions (with blanks), and tests. Everything except answer keys is included within the LIFEPACs. Although Alpha Omega LIFEPACS are similar in format to A.C.E.'s PACEs, Alpha Omega includes a variety of questions to encourage deeper thinking rather than simple recall of factual information.

Children take tests as they complete each section of a workbook before proceeding to the next. Tests check on student mastery of current subject matter and also review previously mastered material. A second test is included within each LIFEPAC to be used as needed.

Alpha Omega offers full curriculum for grades one through twelve, including Bible and electives. (Non-denominational Christianity is integrated throughout the material, not just in their Bible courses.) Courses are available in complete sets for each subject for each grade level. For most courses, each boxed set includes ten LIFEPACS and a complete teacher's guide which includes all answer keys, tests, and teacher helps for the subject for that year in a perfect-bound volume. (Grade 1 teachers' guides are in two volumes because of their size.) Subject areas are Bible, Math, Language Arts (English), Science, and History and Geography for the elementary grades. (History and Geography combine within one LIFEPAC strand.) While you can buy complete grade-level packages, you can also purchase subjects separately, selecting different grade levels if need be. Only a few of the LIFEPAC courses require the use of a supplementary book to complete the course. Alpha Omega offers elective courses for many subjects such as art, foreign language, government, literature, health, speech, business, and worldview.

Alpha Omega emphasizes that their material should not be used by a child working totally independently but that parents need to be involved, supplementing with activities and other interaction from the teachers' manuals to ensure an effective program. Even though the LIFEPACS enable children to work independently, parental involvement is essential for providing the complete learning experience intended by the publisher. Unfortunately, there is a tendency among home educators to ignore the teacher's manuals and allow children to use the material completely on their own. Because this happens so frequently, I recommend that LIFEPACS be used with older learners (junior and senior high) who are independent, self-motivated, and who do not need much hands-on experience to learn well. However, if parents plan to use the material as designed by the publisher, then it can work with learners who need more parental interaction.

The LIFEPAC approach can be a real boon to parents with many children (especially when there are large gaps between oldest and youngest) or to parents who feel inadequate to help their children in particular subjects.

Alpha Omega offers a Parent Starter Kit which includes some basics for beginning homeschoolers, a scope and sequence for the curriculum, a sample LIFEPAC plus step-by-step instructions on how to use the LIFEPACS which covers organization, administration, and record keeping.

Free placement tests are available online for math and language arts. Inexpensive print placement tests for math and language arts as well as for Bible, history and geography, and science are available individually or as a set. Tests are not timed and they are parent-administered. Step-by-step instructions show how to administer the tests, grade them, analyze the results, and determine which Alpha Omega LIFEPACS to order. The placement tests might also be useful as a general diagnostic testing tool for others not using LIFEPACS.

As of the summer of 2015, grades six through ten have been reformatted with a crisp, easy-to-read appearance that looks more up to date. The content itself for some subject areas has been updated, but some LIFEPACs retain copyrights from the 1990s. Most significantly, the math courses have been heavily revised and updated for better alignment with the more rigorous coverage offered by other publishers.

You might want to check out the ready-made lesson plans from Homeschool Planet that are available for LIFEPAC courses.