History Through the Ages Timeline Products 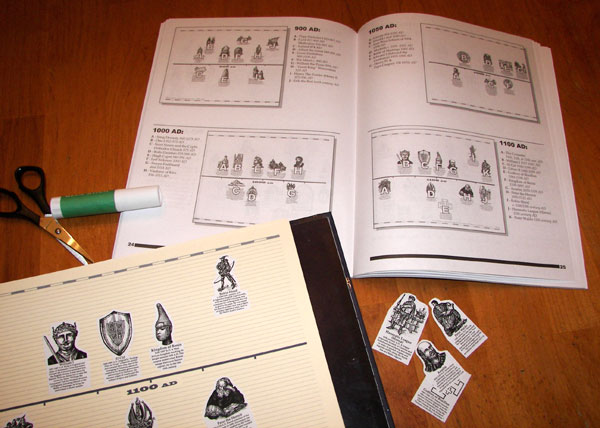 Amy Pak has created what might well be the most comprehensive collection of timeline figures. On top of that, she supplies creative teaching suggestions for using timeline figures. The figures themselves are all drawn by Amy so they have a consistent style to them. These black-line drawings might be colored in if you wish; Amy recommends colored pencils for this purpose.

Timeline figures are available in your choice of pre-printed materials or on CD-ROMs.

You might have noticed that some packets seem to run far into the future. These "extended" dates are only on the pre-printed timeline mounting pages that come with each packet—heavy-colored paper pre-printed with lines and dates on which students can mount their figures.

Figures in these packets all include a brief descriptive text regarding the person or event. They vary in size, ranging from 2.5" to 4." You are given permission to reproduce the figures for family members, and you might use that permission to shrink or enlarge the figures depending upon how you decide to use them.

All four packets of figures plus a set of "bonus figures" are included in a two CD-ROM set titled History Through the Ages: Creation to Present that can be run on either Windows or Mac computers. Figures are presented in three different ways, making the CD option by far the more flexible. Figures identical to those in the pre-printed packets are available as PDF files. You can print, but you cannot manipulate these. Figures are also presented as GIF files, and in two versions for each figure. One version includes the descriptive text while the other omits the text. The GIFs may be sized on your computer before printing if you want them larger or smaller than the default figures. Resolution of the image files is so high that I was able to print out a single figure on a full sheet of paper and it came out very crisp and clear.

There are so many figures that they cover just about everything you would want, especially if you are teaching from a Protestant perspective. Protestant heroes, missionaries, authors, etc., are well represented, but figures for other religious viewpoints are not. Also, dating reflects a "young-earth" perspective.

While the pre-printed packets include a page of instructions and suggestions, the CD-ROM set features quite a few creative ideas for using the figures such as numerous options for mounting or displaying figures, creating cards with them, and creating games.

If wall-mounting your timeline collection doesn't work or doesn't appeal to you, you might have students put them into books of some sort. While Amy Pak supplies suggestions for this approach, she also makes the project immensely easier by offering History Through the Ages Record of Time, a lovely, custom-designed binder with pre-printed timeline pages with dates for 5000 BC through 2015 AD. After the timeline pages you will also find 17 maps of both ancient and modern times that might be used in your history and geography studies. Each child should have his or her own Record of Time book since they are likely to add to it over many years.

For those who worry about placing figures correctly in Record of Time, perhaps concerned about running out of space for a particular time period, History Through the Ages Suggested Placement Guide solves the problem. This 72-page book shows completed pages and lists the figures for each. An index also helps you quickly locate figures. Although this is an optional item, it might well save you from tears and frustration that will likely result when children don't allow enough room for future entries on their pages.

History Through the Ages Timeline Set - Napolean to Now

History Through the Ages Record of Time