The Story of Liberty 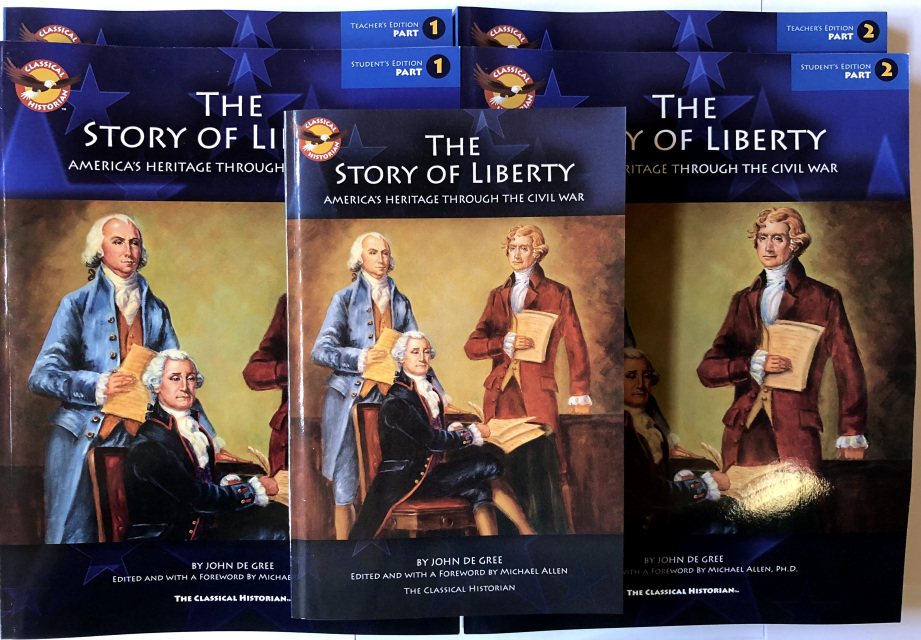 Written for students in grades six through twelve, The Story of Liberty by John DeGree is an American history course taught using a classical approach to education. The course utilizes a textbook authored by DeGree titled The Story of Liberty: America’s Heritage through the Civil War, along with two student workbooks and two teacher editions. As the textbook's title says, this course ends with the conclusion of the Civil War. Since you will probably want to cover the rest of U.S. History, I’ll add a suggestion for a follow-up course toward the end of this review.

Primary source documents are used as part of the course. These are provided free online through links on the product page on the publisher’s website. (Scroll to the end of the Scope and Sequence to find the links for each chapter.)

The course bundle includes all of the above plus a 1.5-hour DVD, titled “Socratic Discussions of the Open-Ended Questions,” where DeGree discusses questions in a Socratic fashion with junior high students.

The Story of Liberty is a very readable textbook that presents the material in eleven units, with a number of chapters within each unit. There are 66 chapters in all.

The first two units trace back through the foundations of western civilization that laid the groundwork for the founding of the United States. This course highlights the principles that undergird our form of government and helped to create the unique culture that developed in the United States. The role of Christianity is recognized, with a positive acknowledgment of the influence of both Protestants and Catholics.

The theme of American Exceptionalism comes up repeatedly. This is the idea that the U.S. is unique because of certain elements that are often intertwined. As DeGree says on page 63:

We can see at least eight elements of American Exceptionalism in the English colonies of the 1600s and 1700s.

These elements are thoroughly explained throughout the course. You might have concerns that the American Exceptionalism viewpoint might be used to justify some of the injustices that have occurred, but that’s not the case. Slavery is treated as a great evil, and DeGree discusses the colonists’ interactions with Native Americans in more detail than I’ve seen in many textbooks. He explains the cultures, personalities, and events at play to help his readers understand what was really going on rather than to form simplistic opinions. For instance, he acknowledges the illegality and immorality of the relocation of the Cherokees (the Trail of Tears), but he presents some other conflicts with Native Americans in a more nuanced fashion with blame for both sides.

Clearly not a fan of big government, DeGree identifies points at which there were significant expansions of the power of the federal government and resultant problems. In one such instance, he explains how Andrew Jackson’s expansion of power for both the government and the presidency increased the use of the spoils system, allowing elected officials to reward their supporters at taxpayers’ expense (p. 191).

While reading the textbook has value in itself, the entire course takes students beyond just learning the book’s contents. The other course components have students read and analyze historical documents, participate in Socratic discussions, research information, debate ideas, and write essays. An extensive section at the beginning of The Story of Liberty: Teacher’s Edition, Part 1 explains in detail how to teach the course and how to gradually draw students into participation in what might be unfamiliar methods of learning, including writing an essay for each of the course’s 11 units.

The 11 units each have three to nine chapters. The two workbooks, Student's Edition (Part 1 and Part 2), have sections labeled Grammar, Logic, and Rhetoric for each chapter of the textbook. The workbooks also have a fourth section for every chapter for map work or another activity. Grammar sections subtitled “What You Need to Know” list key vocabulary words, terms, or concepts, and each of these is followed by a brief description. The Logic sections contain both inference and reading-comprehension questions. These are multiple-choice questions, each followed by lines on which students are to write out the sentence from the text that best supports their answer. The Rhetoric sections have a few questions that are to either be answered with short essays or used for discussion.

At the end of each unit, the workbook has a section drawn from The Classical Historian's original Take a Stand! books that were also written by DeGree. These sections help students learn how to form opinions based on evidence, then present those opinions in an essay. A variety of activities help students gradually develop the knowledge and skills they need to do this. (More details about this process are in my review of The Classical Historian.)

The instructions for this course are so thorough that even parents with no teaching experience can teach it and students working independently can figure it out on their own. The instructions address both classroom and single-student settings, but most students will benefit if they can work through the course with at least one other student, especially the unit activities.

As the Teacher Edition, Part 1 explains, students do not need to complete every assignment and activity in the workbooks. A parent or teacher can decide to have students write out the sentences that support their multiple-choice answers for only one or two questions rather than all of them. They can assign only one or two of the rhetoric questions. If a student already writes excellent essays, the parent or teacher might skip some of the unit activities that help develop writing skills. There are a number of such choices that could be made, so the parent or teacher should consider fine-tuning the course to suit the needs of each student.

The teacher editions have all of the assignments that are in the student book, with answers overprinted when they are predictable. They also have a test for each unit that has multiple-choice questions and one essay question. Answer keys follow immediately after each test.

Note that members of The Classical Historian's The Dolphin Society get free access to The Story of Liberty video course, although they will still need all of the printed books for the course.

Covering the Rest of U.S. History

Since The Story of Liberty ends with the Civil War, it would be ideal to follow up with DeGree’s Modern American History course covering 1865 to the present since that course uses similar methods of learning. If you begin The Story of Liberty course with a sixth or seventh grader, you should wait until at least ninth grade to begin the Modern American History course since that course’s textbook is written for an adult audience.

I love the approach DeGree uses in the Take a Stand! courses, but it has sometimes been challenging for The Classical Historian to find appropriate textbooks to use for each of those courses—textbooks that have great content, are written for the targeted grade levels, and that stay in print. By writing The Story of Liberty, he has solved that problem for this course. The textbook supports the concept of American exceptionalism and will probably appeal most to those with a conservative political philosophy. But the course as a whole teaches students to weigh information, consider the opinions of others, and learn to think for themselves.