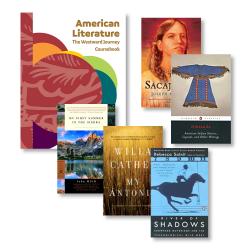 American Literature: The Westward Journey is a one-semester course designed for eleventh and twelfth graders that includes both literature and composition. It does not teach composition skills, but it requires students to write many different types of compositions. (Student should have either prior or simultaneous instruction in composition.) Oak Meadow offers two other one-semester courses from which to choose if you want to provide one year’s worth of English coursework—Women’s Literature and Word: The Poet’s Voice. Both of these courses also have a significant composition component. These courses are available either through enrollment in Oak Meadow or for use without enrollment.

The course package for the student consists of the American Literature: The Westward Journey Coursebook,  a blank notebook, and the books My First Summer in the Sierra; River of Shadows: Eadweard Muybridge and the Technological Wild West; American Indian Stories, Legends, and Other Writings; My Antonia; and Sacajawea. The teacher manual for the course has to be purchased separately. (Students enrolling in the course through Oak Meadow will not need it.)

There are 18 lessons in the course, and each lesson will take about five hours (over the span of one week) to complete. Some of the lessons are doubled up. For instance, Lessons 4 and 5 are combined for what should be a two-week unit project. The lessons are grouped into four units. Three of the units have a theme, and the fourth unit sets aside three weeks for students to create a project.

The coursebook provides step-by-step lesson plans with assignments so that students can work independently for the most part. However, discussion of some of the questions would certainly be more beneficial than having students write answers to all of them.

Most lessons in the coursebook conclude with an optional section titled “Up for a Challenge.” These describe one or more activities that might require research, writing, photography, or another type of project.

Integration of Literature and Assignments

In this review, I am writing in more detail than usual about the course assignments for two reasons. First, the course has an unusually limited focus for an American literature course—concentrating on westward migration and exploration, the displacement of Native Americans, and the struggles of assimilation for various groups. Secondly, it frequently has students think and write about particular themes as they pertain to more than one of the assigned literary works.

The theme for the first unit is Discovery, and students will read My First Summer in the Sierra and River of Shadows. These two books and the unit’s lessons delve into the discovery-related themes of people relocating, immigrating, or investigating new places; the wonders of nature that inspired naturalists and environmentalists; and technological innovations that changed the face of America. Students will write a self-reflection essay about their own family history, a comparison essay about how differently Native Americans and immigrants to the western U.S. in the 1800s viewed and treated the land, and a comparison essay about John Muir and Eadweard Muybridge (key figures in the two books). The last two lessons of this unit have students create a multimedia unit project on the topic of either “An Expression of Time” or “The Effect of Technology.”

The second unit, titled Homeland, uses the book My Antonia which deals with the immigrant experience in the 1800s. Students will write an essay on the seasons based on the observations of the story’s narrator. In the second assignment, questions guide students through reflections on social relationships, discrimination, prejudice, and coming of age. Then, in relation to a passage in My Antonia, they are to write about the “themes of time and timelessness found in the works of Muir and Muybridge.” The third assignment has students answer a series of questions regarding the chapters read, then offers the option of either writing descriptions of the original book’s illustrations (images are included in the coursebook) or creating their own illustrations for three scenes and writing their own commentary about their illustrations. The next assignment has two parts. Students will write two paragraphs reflecting on the lack of a traditional romance in My Antonia, and they will also write a lengthier essay about the attitudes conveyed in all three books read thus far about the inclusion or absence of Native Americans in these literary works.

The third unit, titled Belonging, assigns the reading in Sacajawea and American Indian Stories. The first assignment has students compare the help offered to immigrants in My Antonia with that offered to the Lewis and Clark expedition in Sacajawea. The second assignment has multiple parts. Students first create a timeline of crucial events in what is now the U.S., with a focus on charting the devastation caused by the displacement of Native Americans. Next, they write an essay on the significance of key historical events and the impact they have had on themselves. After that, they write an essay or make a visual or creative project about a story from American Indian Stories. The third and fourth assignments consist of a series of questions, primarily in regard to American Indian Stories. In response to the questions, students will write at least two essays along with other one- or two-paragraph responses. Two of the questions ask students to compare events in American Indian Tales with those in My Antonia. The last assignment before students work on their final project has students write a two-page essay comparing the dual themes of homesickness and assimilation in both My Antonia and American Indian Stories and also write a three-page essay about how the disruption of Native American religious beliefs resonates or connects with all of the books except River of Shadows (which doesn't address it).

The final project, completed in the fourth unit, is to be about an overarching literary theme. Students are given suggested options for many different ways they might present it. While the project itself might not be written, students will still need to do some writing as they plan and write a proposal for their project.

There are additional aspects to the assignments that require reflection and discussion rather than writing. However, I wanted to highlight the connections made across the literary works that show up primarily in the writing assignments.

Students will write quite a few essays as they work through this course. The writing assignments sometimes deal with literary devices, but more often they deal with the content of the readings, requiring students to use both critical thinking skills and personal reflections. Students are asked to substantiate their ideas with quotations from the books. It is also important to mention that throughout the course, students are instructed to write rough drafts and get feedback on their essays before writing final versions.

American Literature: The Westward Journey is an unusual and interesting course. While it does require a great deal of writing, it also gives students opportunities for creative expression.