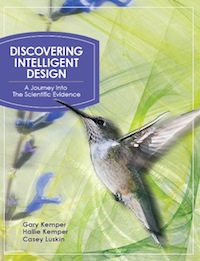 Discovering Intelligent Design: A Journey into the Scientific Evidence teaches material that should be taught within other science courses, especially life science courses, but is not. Scientists within the Intelligent Design movement have been developing arguments that point to the existence of an intelligent agent as the most logical explanation for many scientific phenomena. However, the scientific establishment has vigorously opposed even the presentation of such ideas since it undermines the reigning materialistic view that dominates modern science.

In the educational arena, some Christian publishers have produced courses written from a Christian worldview, but almost all of those courses presume a young earth and are based upon a literal reading of the book of Genesis. In contrast, Discovering Intelligent Design is premised on a much older time span for the existence of the universe, and it argues from scientific evidence without reference to religious belief. As with other resources put out by the Intelligent Design Movement, the goal is to provide evidence of an intelligent designer without positing any particular identification or explanation regarding the designer. All of this makes the course a good fit for those who are open-minded on the age of the earth and are interested in the scientific evidence that helps to answer some of the questions that arise in the origins debate.

Rather than following a standard course outline, This course highlights some of the key evidentiary points made by various authors in books such as Darwin’s Black Box by Michael Behe, Signature in the Cell by Stephen Meyer, and Icons of Evolution by Jonathan Wells, as well as in many science articles. The course also incorporates optional, multimedia elements with free online intro videos for four each unit plus excerpts from four Illustra Media DVDs that are contained an a single DVD. Excerpts are clearly highlighted when they are to be viewed. While these video elements are very helpful and a great enhancement to the course, they are not absolutely essential.

Video introductions for each of the six units highlight some of the key ideas addressed within the upcoming chapters. These videos are probably very useful for most students. Clicking on a "next" button at the end of each video takes you to a page with chapter learning objectives and a chapter outline. After students have read the chapter in the text, they should take the online quiz for that chapter. These online resources might be used in place of the workbook for those who need to shorten time allotted for the course.

The book begins by explaining what Intelligent Design (ID) is and is not. It explains specified complexity, a term that arises over and over again throughout the course and underlies many of their observations and conclusions. It also explains seven primary tenets of materialism which operate as “philosophical restrictions upon science which prohibit any reference to intelligent causes.” It points out that, “ID seeks to remove these restrictions because they block scientific advances and hinder the search for truth” (p. 23).

The second chapter takes time to define terms such as artificial selection, natural selection, Darwinism, Neo-Darwinism, and microevolution, as well as the various possible definitions of evolution itself. The definitions are a critical component in the origins debate, and the text points out the need to clarify definitions, question assumptions, demand evidence, and seek the best explanation given the scientific facts. (Note that these learning strategies address requirements from the Next Generation Science Standards!)

The next five units address four broad topical areas within biology and cosmology: cosmic design, the complexity of life, common descent, the evidence for intelligent design, and academic freedom. There are from one to six chapters in each of these units. Generally, a number of scientific points are raised in regard to each issue. For example, under common descent we learn about such topics as the failure of Darwin’s tree of life to support common design, frauds such as Haeckel’s embryo drawings that were intended to support Darwin’s theory, the evidence of the fossil record for the abrupt appearance of new species rather than gradual evolutionary developments, the lack of transitional forms, and the issue of DNA evidence for links between humans and chimps.

Some of the evidence presented arises from very recent scientific findings, an important factor for those who really want to understand the best evidence on both sides of the debate as it is currently understood.

At the end of each chapter is a set of discussion questions. Some of the questions are essentially asking students to restate ideas taught within the chapter in their own words while other questions prod students to expand their thinking and form their own opinions.

Appendices provide more information on selected topics such as “Cosmological Calculations” and “The ‘RNA Word’ Hypothesis.” The course is based on solid research with 20 pages of endnotes for those who want to explore the documentation.

A companion workbook has activities for each chapter. These include comprehension type questions in various formats: fill-in-the-blank, short answer, and matching columns. There are a few illustrations to label and a word search puzzle. Each lesson includes an essay question and an “Inquiry Activity.” Inquiry activities are a mix of things like science experiments (all easily manageable by high school students without fancy equipment), internet research, use of interactive websites, and personal interviews. Most of these will likely be very interesting and even entertaining. An answer key for the workbook is at the end of the book.

The publisher says the course can be used by advanced middle school students through high school, and even adults, although it is ideal for high school students. While this course can be used by teens, it will probably be most effective in a group class taught by someone who already has an understanding of the material or by someone willing to read through the course material and do some additional reading on the topics.

The biggest problem for high school students is figuring out how to fit Discovering Intelligent Design into the curriculum since it doesn’t fit into the normal curriculum sequence. It could be taught as an elective course in one semester, although it could be done at a slower pace over one school year. It could also be used as a supplemental course alongside another life science course if you skipped the workbook; you could assign a chapter to read at the beginning of each week, then discuss the chapter on Friday. Using this approach it would take 20 weeks to complete. Or using the workbook and some activities you could still complete the course in one school year, meeting only once a week.

The science isn’t particularly difficult, but there is sometimes quite a bit of scientific vocabulary plus assumptions that student possess basic scientific knowledge. Definitions are included throughout the text as well as in a glossary. Students with some prior knowledge will find it easier to absorb the information if they already understand the context. For example, prior understanding of the roles of DNA and RNA will help students understand the "Information, Please" chapter about the transmission of genetic information. The science is certainly presented at a much more understandable level than in some of the source books, but it is not dumbed down. The course is especially valuable for teaching students to think analytically and critically about scientific theories and data.

Discovering Intelligent Design takes an intelligent design-based approach, and as the textbook explains, intelligent design is different from creationism. Nonetheless, the curriculum might be an excellent resource to use alongside other science programs that teach creationism, as it can help students understand many key concepts of evolution as required by the Next Generation Science Standards. This course teaches evolution concepts but in an analytical fashion that includes challenging evidence. For example, one standard (HS-LS4-1) reads: “Communicate scientific information that common ancestry and biological evolution are supported by multiple lines of empirical evidence. [Clarification Statement: Emphasis is on a conceptual understanding of the role each line of evidence has relating to common ancestry and biological evolution. Examples of evidence could include similarities in DNA sequences, anatomical structures, and order of appearance of structures in embryological development.]” The course's authors explain how they address this standard: "Discovering Intelligent Design covers these common lines of evidence used to support common ancestry, such as DNA sequence data, embryology, fossils, and anatomy. However, we also discuss how this evidence can also challenge common ancestry."

The authors are adamantly opposed to any efforts to teach the course in a public school setting. They want the discussion of intelligent design to proceed outside of the highly-politicized arguments about what gets taught in public schools.

On a side note, to me the course seems very appropriate for a post-high school audience with some science background. College students and adults should be able to work through the course on their own, although they would certainly benefit from being able to meet with others and discuss the course content.

I’ve read quite a few books by authors who support the ID movement, but I realize that most people are unlikely to read even one of those books. This course presents some of the most important ideas from those books, making that information much more accessible to those who want to be well informed about the science pertinent to the origins debate.

Free sample chapters from the text and workbook are available on the publisher’s website. The full curriculum package includes the text, the DVD, and the workbook, and the other online resources are free.

Discovering Intelligent Design: A Journey Into the Scientific Evidence