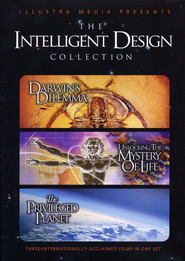 Intelligent Design (ID) has been maligned by Darwinians as well as by creationists, yet ID proponents are doing some excellent scientific work and writing some outstanding books that might be especially helpful to creationists. ID does not propose a complete model for the origin and development of life. Instead, they take a much narrower approach to demonstrate that based on science, “that nature, or certain aspects of nature, are best explained by intelligent agency” (Jay Richards, Evolution and God, Discovery Institute Press: Seattle, WA, 2010, p. 28.)

I’ve reviewed a number of resources that deal with ID such as the books Darwin on Trial, Defeating Darwinism by Opening Minds, and Signature in the Cell. Illustra Media has created some outstanding DVDs based on the work of ID proponents that are excellent for all audiences, especially those inclined to believe in Darwinian evolution. Creationists who might have reservations about the ID movement should nevertheless find these resources useful for getting audiences to begin to understand the problems with Darwinian evolution and the likelihood of a creator or an intelligent source. All of these DVDs are high quality productions with gorgeous footage of nature and occasional graphic animations demonstrating microscopic biological mechanisms mixed with interviews with prominent scientists. While all of these DVDs are great for church groups, they also might be useful for sharing with skeptics or even those who think that Darwinian evolution is a proven theory.

Note that there is an “Intelligent Design Collection” that includes three of these DVDs at a great price: Darwin’s Dilemma, The Privileged Planet, and Unlocking the Mystery of Life.

Metamorphosis is the magical story of butterflies. Filmed in the Ecuadorian rainforest and other settings, it begins on a general level showing many butterfly species and their amazing life cycle. It gradually focuses in on the Monarch butterfly and its unique migratory pattern to Ecuador each year.

The last part of the DVD explores the inexplicable problem confronting Darwinians in the butterfly’s life cycle. The basic problem is that caterpillars cannot reproduce. They must first transform into butterflies. Then butterflies can lay eggs. However, during the process of metamorphosis, most of the body structures of the caterpillar are broken down into a “chemical soup” from which redesigned and entirely new body components are created for the butterfly. A gradual evolutionary process of one mutation at a time would prevent the caterpillar from surviving the process to even become a butterfly. And a process as complex as metamorphosis, in evolutionary terms, would require a huge number of genetic mutations that would require an extremely long timespan to develop. (Try searching the internet for evolutionary explanations of metamorphosis and you find some wild hypothesizing with no evidence.)

Metamorphosis is a fascinating production if you want to learn about butterflies, but beyond that, it is a good starting place to get someone started thinking about difficulties associated with the theory of evolution. Video run time is 64 minutes. Children in the elementary grades are likely to enjoy the story of the butterfly, but they might get lost in the last part of the video. It is probably best for junior high students through adults.

Darwin’s Dilemma: The Mystery of the Cambrian Fossil Record

Evolutionists claim that the fossil record is one of the strongest proofs for their theory, yet the Cambrian explosion very much works in the opposite direction to undermine the theory. The Precambrian geologic layer has revealed single-cell, simple life forms. According to geologists, millions of years later, there’s another layer that is suddenly full of a variety of life forms representing most modern day phyla, although in different forms than we see today. According to Darwin’s prediction, all life arose from a single ancestor, gradually developing into one type of creature, then branching out into various phyla in a succession. The abrupt appearance of many phyla poses an obvious challenge to Darwin’s theory.

Darwin’s Dilemma shows Cambrian layer discoveries around the world that consistently provide evidence for this abrupt appearance of life in the Cambrian explosion. Although many people think the fossil record has produced clear evidence of evolution, this video clearly undermines that assumption in regard to the first multi-cellular life forms.

The video runs 72 minutes and is best for a teen and adult audience.

Privileged Planet: The Search for Purpose in the Universe

Privileged Planet might be a good choice for skeptical audiences. Using spectacular film footage, computer animations, and interviews with scientists, it presents the idea that the earth is very uniquely designed and positioned for life in contrast to almost all planets in the universe. Many people believe that it is likely that there is life on many other planets, but this presentation shows the numerous essential conditions that have to be met to even allow for the possibility of life. Among those conditions are the size and composition of our sun, the size of the earth and its distance from the sun, the relative size of the moon, earth’s magnetic field (because it contains iron), the oxygen rich atmosphere, the existence of water, the precise tilt of the earth’s axis, and many others. Even within our own solar system we can see the diversity in the makeup of each planet. This same diversity is found throughout the universe, making the particular combination of conditions for the earth hugely improbable anywhere else. While this argument alone does not provide unassailable evidence that life exists only on earth, it does counter the general perception that life could easily arise on other planets as it has on earth.

More importantly, Privileged Planet presents the “fine tuning” required for the existence of life on earth as evidence of a fine-tuner at work—a Creator.

Privileged Planet runs 60 minutes and is appropriate for about ages 11 and up.

Unlocking the Mystery of Life

Unlocking the Mystery of Life begins with a brief introduction to the birth of the Intelligent Design movement and the key people involved. It provides background context for the rest of the DVD that focuses on two of the most prominent issues raised by the ID movement thus far. Michael Behe explains his concept of irreducible complexity using the bacterial flagellum as a prime example of a biological “machine” with many intricate parts, all of which are necessary to create a working flagellum. Evolutionists try to explain away the problem by saying that different parts of the flagellum could have been assembled into a useful intermediate mechanism that later developed into the full-fledged flagellum. However, the DVD demonstrates the impossibility by showing that 30 of the 40 components of the bacterial flagellum cannot be accounted for as parts of any other biological mechanism that might serve as a precursor. The DVD also points out that the problem is exponentially more difficult since all of the parts, once they are created, need to be carefully assembled into an exact order to be functional.

The second issue addressed is the creation of amino acids and proteins. The DVD uses animations to demonstrate the complexity of even the simplest protein as well as the process by which proteins are created. It points out recent discoveries in microbiology that have revealed an incredible complexity in living cells that we are just beginning to understand.

Unlocking the Mystery of Life is for older teens and adults, particularly those interested in scientific details. 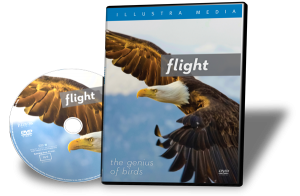 Flight: The Genius of Birds is the first of a planned series titled The Design of Life. DVDs in this series will each highlight a different realm of the animal kingdom. They first explore the amazing biological systems, functions, and interactions of creatures. Secondly, they consider all of this in light of evolution and creation, demonstrating the evidence for intelligent design.

Flight: The Genius of Birds is a fascinating exploration of the world of birds. While it begins with the wide world of birds, it narrows down to three particular species: hummingbirds, English starlings, and arctic terns. Each of these is amazing in its own way.

Hummingbirds move with incredible speed, but they are also able to move in many directions as well as hover—abilities mostly lacking in other species of birds. Their tongues are uniquely designed for acquiring nectar unlike those of other birds.\

English starlings take off from their overnight roosts each morning to fly up to 30 miles away then return each evening. But when they return, they flock together in an incredible spectacle of hundreds of thousands of starlings whirling around in what looks like a choreographed performance before settling into their roosts for the night.

The arctic tern makes the longest migration of any bird traveling from the arctic north down to Antarctica. Scientists were able to track the amazing journey of particular birds, showing that although the birds split to follow two different routes, they still arrived in Antarctica then returned to their same nesting area in the arctic north.

All of this sounds very informational, but it's presented with gorgeous photography that is a delight to watch. The DVD moves on to a study of the biological mechanisms that make flight possible. It stresses the awe-inspiring complexity and the importance of viewing each bird as an integrated biological system rather than a collection of independent systems that could have come together by chance. Even in this section, interviews, illustrations, and computer animations are interspersed with amazing film footage.

Flight is especially good for family viewing. Younger children (probably at least ages five or six) should enjoy most of the presentation through the hummingbirds and starlings. They might start tuning out when the presentation turns to migration patterns and global geography with the arctic tern, and they will have sat about as long as most five-year olds are able by that time. Older children (probably ages eight and up) as well as adults should find the rest of the DVD interesting as well as informative as it delves further into biological structures. I look forward to seeing other titles in The Design of Life series! 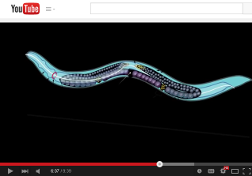 This free YouTube video was created by the Center for Science and Culture rather than Illustra Media, but the goals of all of these videos are similar—to teach science while providing evidence for intelligent design.

C. elegans is a relatively simple creature, a roundworm that is only a millimeter in length. One of the most likely places to find it is in compost heaps. Scientists have used this supposedly simple creature to study its development in detail through every stage from a single cell to an adult worm. It turns out that the process is not at all simple. This short video, “How to Build a Worm,” shows the development of C. elegans, while explaining the complexity of the process and the need for intentional design and foreknowledge within the process. This video provides evidence for intelligent design along with a fascinating science lesson that is easily understood, even by children about ages ten and up.

Unlocking the Mystery of Life

Flight: The Genius of Birds