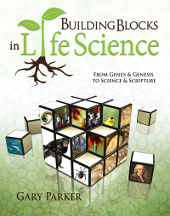 Most Christians understand that one of the biggest obstacles to faith for young people is indoctrination into an evolutionary-based worldview either through their education or the surrounding culture. They come to believe that “everyone knows that there is strong evidence for evolution” even though this is actually not true. A number of books such as Icons of Evolution by Jonathan Wells (Regnery Publishing) and What’s With the Mutant in the Microscope? by Kevin Johnson and James White (Bethany House Publishers) address the issue from a creationist perspective at a level teens can understand. Building Blocks in Life Science presents the evidence in an even better fashion in this illustrated worktext.

The content of Building Blocks is challenging since author Gary Parker takes the time to explain the scientific evidence for each piece of evidence. In this book, he has narrowed his investigation to evolutionary problems in the realm of life science, rather than including geology, physics, and all other areas of science. Thus, the science is more approachable than if, for instance, he were writing about astrophysics. Still, it would probably help if students have already studied some biology and chemistry before reading this book lest they be overwhelmed with too much unfamiliar science. While the content of this book might be intimidating, Parker uses frequent diagrams, photos, and illustrations that are immensely helpful and are often lacking in other books written on this topic for a teen or adult audience.

The book is divided into three units with a number of chapters in each. The first unit, “Biological Change: Darwin vs. Design,” begins with the fundamentals of genetics, species, variations, and mutations, contrasting Darwinian explanations with both the scientific evidence and a creationist interpretation. Parker writes from a young-earth biblical perspective and includes scriptural references and explanations, demonstrating their support for the scientific facts.

The second unit, “Patterns in Structure and Development,” addresses questions regarding topics such as reproduction, embryonic development, homologous structures, vestigial structures, and classification.

Unit three, “DNA and the Origin of Life,” considers the possibilities of spontaneous generation and chemical evolution. It discusses the origin and transmission of DNA as well as the role of protein molecules and other topics.

Parker tries to answer challenging questions that commonly arise such as how so many racial types could descend from only Adam and Eve, whether or not mutations are a possible vehicle for evolution, why intermarriage between the children of Adam and Eve would not have been a problem, whether homologous structures are credible evidence for evolution, the possibility of time and chance allowing for the process of evolution, and even whether the fact that men have nipples is evidence for or against evolution. He tackles fewer topics than some other books, skipping some topics such as the fossil record (which might better be considered under geology) and hominids. However, he goes further in-depth on his selected topics than do comprehensive biology texts such as Apologia’s, BJU Press’, and A Beka’s. Thus, you could even use Building Blocks alongside texts that already present a creationist perspective.

Each chapter concludes with a page of fill-in-the-blanks, true/false, circling, matching, and short-essay questions. An answer key is at the back of the book along with a helpful index. Students should be able to work through Building Blocks independently, but since many parents are not familiar with the subject matter, it might make a great resource for parents and teens to complete together.

At 158 pages, this book should be quicker to complete than most textbooks, so you would use it as part of high school level course rather than as a complete course.