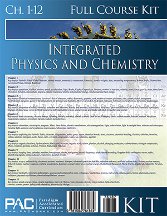 I was particularly interested in reviewing this course since it was written by John Hudson Tiner, author of the “Exploring” series of books that I thought were especially well written. In my opinion, Tiner’s writing style proves to be critical in Integrated Physics & Chemistry. He takes two subjects that are often presented as dry collections of information and turns them into historical and biographical journeys through the development of science. You could aptly call this course “The Story of Chemistry and Physics.” For example, in Chapter 2, Lesson 3, Tiner discusses motion and acceleration using plenty of modern-day situations while also explaining how Galileo experimented to discover the principles and come up with the mathematical formulas such as that for acceleration due to gravity. This approach helps students understand how scientists developed scientific concepts over the centuries, often building on the work of other scientists.

Combining chemistry and physics into a single course makes a great deal of sense since there is already overlap between the two. Tiner sometimes focuses heavily on either chemistry or physics, but often combines the two.

In contrast to most other chemistry courses, Tiner focuses on individual chemical elements from the periodic table, explaining the historical background as well as properties and uses of each. For example, two sections (eight pages) expand on specific forms of carbon: charcoal, graphite, and diamonds. In the subsection on diamonds, students learn about the crystalline structure of diamonds that contributes to their hardness, the hardness of diamonds and their consequent usefulness in manufacturing, refraction of light and the sparkle of diamonds, diamond cutting, carats as units of weight, about famous diamonds in history, the formation of diamonds, and the history of attempts to create synthetic diamonds. Likewise, Archimedes' early discoveries regarding physics are incorporated into section three of chapter two about simple machines, mechanical advantage, pulleys, and automobile jacks.

Students learn a great deal of scientific information but it is not the same content as is typically found in other texts. Instead, it seems to me to be both more interesting and more practical.

There is no lab work in this course. You might use something like the Thames and Kosmos Chem C1000 Experiment Kit and/or Physics Workshop kit, each of which has its own manual with lots of experiments and activities from which to choose. These kits are fun to use and are not as mathematically demanding as are most lab courses. Links to other possible sources of lab resources are on the publisher’s website.

The course is presented in a set of booklets or through an online option that presents essentially the same course material as the booklets. The course is presented in a set of 12 “chapters,” each of which is a 60 to 64 page softcover book similar to Alpha Omega’s LIFEPACs or A.C.E.'s PACEs. Breaking the text content up this way makes it less overwhelming although you can see that there is well over 700 pages of text material. Texts are printed in black and white with a mixture of clip art, photos, and charts for illustration. Students do not write in these books. They are intended to be non-consumable and reusable. In addition to the textbooks, there is a set of 12 Activities books, each of which is 30 to 40 pages in length. These correlate directly to the text booklets. Rather than hands-on activities, these books present questions for students to answer—fill-in-the-blank, multiple choice, true/false, and brief written response questions. These function like end-of-chapter questions in a typical textbook. The online course presents all of the textbook and activity book content online in an interactive format.

The course is designed for independent study and most students should find it very easy to understand and work through the lessons on their own. Students are given access to answer keys for the Activities questions so they can check their own work. They do not have access to quizzes and tests or those answer keys.

The text booklets include an extra feature that is found in all of Paradigm's courses—“Life Principle” quotations. Quotes are from famous people rather than the Bible, although I did spot one from Proverbs. Quotes such as “Unless you try to do something beyond what you have already mastered, you will never grow” by Ralph Waldo Emerson are intended to be motivational. Paradigm views this as important enough that they require students to write the quotations in the Activities booklets and include quiz and test questions on them.

The Teacher’s Resource Kit is an essential component if you are not using the online course. The bulk of the Teacher's Resource Kit is quizzes, tests, and answers keys. While these are reproducible, there is also a CD-ROM disk in the kit from which you can print these as well as other forms: an academic contract, record-keeping forms, a report card, a transcript, and a chart of “Daily/Weekly Wisdom Quotes” (different from the Life Principle quotes). The kit also includes a single page “What and How Students Will Learn From This Course” that is to be copied and given to the student. This explains a few important details such as the fact that underlined numbers on activity questions indicate questions that will appear on quizzes or tests so students know exactly what they need to study.

The course is generally secular in presentation, but Tiner’s Protestant outlook on history creeps in at the beginning of the first “chapter.” Curiously, he makes a broad statement on p. 7 that is historically unsupportable. He says, “From 600 A.D. to 1400 A. D., Europe fell into the Dark Ages.... Science did not advance during this era of time. The Bible was forbidden in many countries, thus, learning and knowledge came to a standstill in Europe.” Equating Bible access and learning ignores the facts that universities began to develop in the late 1100s, that science was sponsored primarily by the church during this period, and that there were influential scientists in the “western world” such as Roger Bacon, Albertus Magnus, and Robert Grosseteste before the 1400s. In addition, the development of the printing press helped advance all learning because it made it much easier to share and convey information that had been learned. Tiner actually acknowledges this a little further on in the course. Because of his outlook, Tiner tends to lump science through the Dark or Middle Ages into the category of alchemy and ignore a few key figures. However, none of this really detracts from the coverage of chemistry and physics.

Personally, I think the content of this course is likely to instill interest in chemistry and physics better than most other traditionally designed courses. The content has solid academic value and is engaging for students even though it is not as challenging. However, students who intend to go on to college and pursue careers in the field of science might need more math-based courses in preparation for advanced science studies. Students who plan to pursue vocational training or attend community colleges, or who do not plan to pursue science careers might find this course a good option. Adding a lab component is important for any student who intends to go to college.