How to Diagram Any Sentence: Exercises to Accompany the Diagramming Dictionary 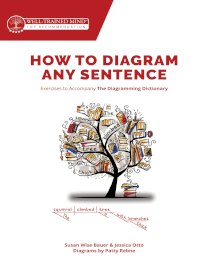 How to Diagram Any Sentence was designed to work hand-in-hand with The Diagramming Dictionary. The publisher, the Well-Trained Mind Press, also publishes the Grammar for the Well-Trained Mind series that can be used for grades five through twelve, and How to Diagram Any Sentence includes a section showing correlations to lessons in that series. The two books in the diagramming set might be completed in a semester as a standalone course or over several years in conjunction with other courses.

Fifth grade is probably the youngest level to start using the diagramming set since it assumes that students are already familiar with parts of speech and their usage within sentences, as well as topics such as clauses, prepositional phrases, gerunds, and appositives.

You might be questioning the value of having students learn sentence diagramming since it’s no longer taught to most students, but I believe it has tremendous value. As the authors state in How to Diagram Any Sentence, “Diagramming can show you why a sentence is, or isn’t, working—with a minimum of wasted time. Diagrams are a simple, visual representation of the logical relationship between the words in a sentence” (p. ix). In addition, I have found that students often enjoy diagramming sentences when it is approached like solving a puzzle, figuring out where the pieces go.

How the Lessons Work

In The Diagramming Dictionary, students study one rule at a time for diagramming a particular sentence component, along with an example sentence and its diagram. Then they practice what they have learned with exercises in How to Diagram Any Sentence. 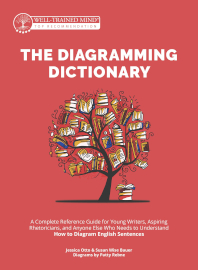 The Diagramming Dictionary is divided into six parts, with the first part titled, “Part 1: How to Diagram the Simple Subject and Simple Predicate of a Sentence.” Even though students are learning about subjects and predicates, this section progresses quickly into complex sentence diagramming. For instance, the sixth of the 18 rules concerning simple subjects covers compound subjects with more than one coordinating conjunction. The example sentence (taken from Japanese Fairy Tales by Yei Theodora Ozaki) reads, “The horse and the hound and the horn belonged [belonged has a double underline] to the farmer sowing his corn.” Students are provided with the complete diagram of this sentence, which includes coordinating conjunctions, the prepositional phrase (“to the farmer”), and the participial phrase (“sowing his corn”). While the treatment of the compound subject and coordinating conjunctions is explained, the diagrams for other sentence elements are not. However, this does not prove to be a problem. When students shift to the practice exercises in How to Diagram Any Sentence—four sentences to diagram for each rule—they are not expected to diagram the entire sentences but only the featured parts of each sentence. In this case, it would be only compound subjects and conjunctions, along with the simple predicates. The remainder of each sentence is printed in italics to identify the parts students can omit from their diagrams.

Students can then turn to the answer key, which forms the bulk of this book. There, a diagram for each practice sentence includes at least the elements students are required to complete and, sometimes, additional elements. Students can easily check themselves as they go, ensuring they understand each process.

The diagramming books can be used in all educational settings, and they should work well for independent study. However, it is important that students read both the Foreword and the “Before We Begin” page in The Diagramming Dictionary, since both provide practical tips and guidelines. Parents who prefer to check student work themselves can print or copy the pages with the exercises from How to Diagram Any Sentence and keep the answer keys separate.

Many parents don’t know how to diagram sentences themselves or are not confident teaching the skills, but The Diagramming Dictionary and How to Diagram Any Sentence used together make it possible for students to learn, even without parental assistance. And this might be the perfect opportunity for parents to learn along with their children, puzzling out each sentence diagram together.

How to Diagram Any Sentence

How to Diagram Any Sentence: Exercises to Accompany The Diagramming Dictionary (Grammar for the Well-Trained Mind)

The Diagramming Dictionary: A Complete Reference Tool for Young Writers, Aspiring Rhetoricians, and Anyone Else Who Needs to Understand How English Works (Grammar for the Well-Trained Mind)