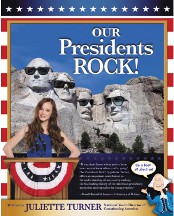 Our Presidents Rock! should work best for homeschoolers as a supplement for study of U.S. History and/or Government. While the book is interesting, it is not something you are likely to read straight through. It makes more sense to study the section on each president as you encounter them in your history studies.

The book has catchy graphics and is printed in full color. Since this is a 316-page book, a number of pages are dedicated to each president, covering topics that would fall under both history and government.

The format is similar to that of Our Constitution Rocks! by the same author. Text material is broken up into small segments with headings like, “The Bottom Line” (summarizing each presidency in just a few sentences), “What Was He Thinking?” (philosophical and political outlook of the president), “Why Should I Care?” (long-lasting results from each president), “Breakin' It Down” (brief biography on a personal and political level), “Presidency” (major events and accomplishments during his presidency), and “What Has He Done For Me Lately?” (oddly-titled section that talks about a major accomplishment, often one that brought significant change).

Artistic call-out boxes feature “Fun Facts,” “Presidential Personality” (comments about the president's personality), the “Congressional Corner,” (highlights key laws passed by Congress during a president's administration), “Election Results” (highlighting interesting stories relating to some presidential elections), and other special topics. Cartoon conversation bubbles relate quotes from the president or comments by the book's author. The “Presidential Times” newspaper-formatted pages feature articles that fill in information on key events during each president's tenure). Timelines help the reader view both national and international events in relation to each presidency. The variety in the modes of presentation makes what could be dry information much more interesting.

The tone is generally even-handed in regard to political viewpoints. However, the author tends to emphasize positive aspects of each presidency, sometimes neglecting controversies or major criticisms. Nevertheless, the treatment of presidents in Our Presidents Rock! is probably very appropriate for any students who have already studied United States History as well as for those who will read this book in conjunction with such a study. Since the book also has substantial coverage of subject matter that relates to the way government functions, you might also consider using Our Presidents Rock! alongside Our Constitution Rocks! or another resource for studying government.