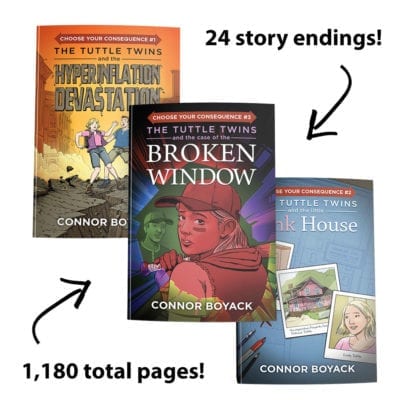 The Tuttle Twins, Ethan and Emily, are 15 years old in this series. While the other Tuttle Twins series (The Tuttle Twins and The Tuttle Twins Guidebooks) teach conservative and libertarian ideas about government and economics more directly, the Choose Your Consequence series embeds concepts related to personal responsibility, individual freedom, economic principles, morality, and limited government within the stories, teaching more indirectly than in the other two series.

The storylines in these books are interesting enough that they would probably have done well as straightforward books. Adding the “choose your consequence” design is likely to induce most readers to go back and try other pathways through each book to see the outcome of alternate choices.

In Hyperinflation Devastation, the Tuttle Twins take off on an adventure to South America to explore Incan ruins. The twins have planned and saved for more than two years to make this trip happen. They’ve learned about their destination. They’ve learned to speak Spanish. They have learned about exchange rates and the best methods of exchanging money. They have packed appropriately with the proper clothes, maps, and emergency contacts. They seem to have planned for everything. (This book could serve as a primer on preparing for world travel!)

As can happen on any trip, the twins have to deal with broken-down transportation and scams the locals attempt to perpetrate on tourists. When an earthquake shakes the country—a country already in poor shape economically—the twins discover how quickly economic chaos can set in. This presents the twins with a number of challenges such as finding that hyperinflation has quickly and drastically reduced the value of the money they had on hand. What the reader learns often depends on their choice of consequences. For instance, in one scenario, the Tuttle Twins learn that cryptocurrencies can’t be inflated by governments and might prove to be more stable than government currencies in emergencies such as hyperinflation.

The twins also learn about the need for personal charity and kindness—the point at which the free market and personal self-interest run up against their limitations and can lead to problems.

In the second book in the series, Little Pink House, a chemical corporation wants to take the twins’ grandmother’s house so they can use the land for a chemical factory and a golf course. Among the many issues raised in this story are zoning laws, referendums, property rights, bribery, civil asset forfeiture, and the economic problems and displacements that often arise with the building of new developments.

Broken Window presents Emily with a number of dilemmas after she hits a home run that breaks the beautiful stained-glass window on a church. Does she fess up and take responsibility for it or does she hide the truth? Against this backdrop, the story delves into the idea of insurance and who actually pays for the cost of repairs.

A sideline story reveals two conflicting sets of books for the city’s finances that make it appear that a large amount of money has gone missing, and the twins learn about government bonds that are sometimes used to keep pushing debt down the road rather than paying it off. They also discover that city officials are using blight designations for certain properties so that the city can take them through eminent domain to be used for other purposes. In response, the twins learn how to use social media to influence public opinion to stop the redevelopment.

All three books bring attention to many economic principles and ideas about government that young people should be aware of, many of which apply to current events. The principles and ideas mesh smoothly into the stories, even while the stories advance in different directions. These books are large enough (284 to 508 pages each) to allow for many different choices with a number of possible conclusions, and readers are likely to learn something new with each iteration of the story.