This is one of my 103 Top Picks
Memoria Press 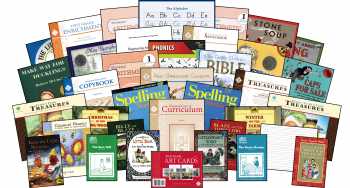 Memoria Press has been creating many of their own products for presenting a classical Christian education for many years. They now have complete grade-level packages with lesson plans that incorporate their resources along with some from other publishers for pre-K through tenth grade. All subjects are covered, including Bible/religion.

A number of features reflect the program's classical approach. For example, many of their courses use recitation, repetition, copywork, and memorization to help students master skills and concepts. Literature guides for each level direct students through the study of real books rather than readers. Latin is introduced in second grade.

There are additional features of the program that distinguish it somewhat from traditional curricula. Memoria Press’ Christian Studies program begins in third grade; these books guide students through the study of The Golden Children's Bible. Copybooks used in the early grades include verses from the KJV. Nature walks and nature study are an important part of science study for the younger levels. Students in third grade and beyond study other, sometimes unusual, science topics such as astronomy in fourth grade and both birds and medicine in the sixth grade. Music and art are incorporated for kindergarten through third grade.

A Curriculum Manual is included with each course. The manuals have specific teaching instructions in about the first ten pages followed by detailed, daily lesson plans showing what resources to use, which pages to cover, and extra instructions as needed. Check-off boxes can be used if you want the Curriculum Manual to also serve as your record book. These manuals have a suggested schedule for how much time to allot to each subject and the order of subjects, but it is followed by a blank schedule for you to customize your own schedule. Appendices at the back of each manual include prayers, memory work, and other helpful resources appropriate to each level. They also feature read-aloud book lists, poetry lists, and music and art lists that show which selections correlate with each week’s lesson for kindergarten through second grade. Lists of read-aloud books that correlate with lessons are included for junior kindergarten through sixth grade.

The curriculum is very structured and depends very much on interaction with the teacher. The same curriculum can be used with either class groups or individual students, although things like discussions, public speaking, and some activities might be more enjoyable or profitable with more than one student.

The Jr. Kindergarten (pre-K) program teaches number and letter recognition as well as handwriting. The program includes other resources such as Richard Scarry's Mother Goose, Hailstones and Halibut Bones, Big Thoughts for Little People, and The Book of Crafts: Jr. Kindergarten.

The kindergarten program assumes that children can count to ten, print their names, and recognize most letters. In this half-day program, kindergartners learn to read short-vowel words and a basic sight-word vocabulary by using Memoria’s First Start Reading course, Classical Phonics, Christian Liberty Press’ Nature Reader K, and EPS Primary Phonics Readers. Phonics, math, recitation, and either copybook or memory work take place each day. The Story Bible is used for reading aloud, discussion, copywork, and memory work. Music, art, read-aloud books, poetry, social studies, and science rotate, sharing a half-hour time slot at the end of each day in the recommended schedule. While science and social studies topics come up within other subject areas, each is given only one dedicated lesson per week. The priority given to math and phonics is entirely appropriate for the kindergarten level.

The first-grade program continues to develop phonics and reading skills along with other subjects in a manner similar to that of the kindergarten program. Math is taught using the second half of  Rod and Staff's Beginning Arithmetic and the first unit of Rod and Staff's Working Arithmetic. Spelling and cursive handwriting are also introduced at this level, using Traditional Spelling I and New American Cursive 1. Classic children’s literature begins to play an important role in the curriculum with fifteen read-aloud books and the Memoria Press StoryTime Treasures study guides.  Children continue with The Story Bible and its companion, Christian Studies Enrichment. The entire program can be completed in about three to four hours per day.

Second grade introduces Latin with Prima Latina and brings in American history content with literature selections such as The Courage of Sarah Noble, Little House in the Big Woods, and Animal Folk Tales of America. Rod and Staff's Patterns of Nature provides a gentle introduction to science.

Third grade in both Classical Core and Accelerated Classical Core builds the historical foundation for a classical curriculum with D’Aulaires’ Greek Myths and a Christian foundation with Christian Studies I. Students also use Memoria's States & Capitals set, Memoria Press's Introduction to Composition, and English Grammar Recitation Book One. Classical Core students study animals and living things for science, and study four novels: Farmer Boy, Charlotte’s Web, A Bear Called Paddington, and Mr. Popper's Penguins. They continue the study of Latin with Latina Christiana I. Those in the Accelerated program will complete most of these courses in one year, while those in the Classical Core program will spread some of the course work out over two years.

Fourth graders in the Classical Core continue with D’Aulaires’ Greek Myths, Latina Christiana I, Christian Studies I, States and Capitals, English Grammar Recitation, and Introduction to Composition. They also study astronomy, Rod and Staff's fourth-grade math, and Classical Composition I. Fourth-grade literature includes the study of Homer Price, Dangerous Journey, The Cricket in Times Square, and The Blue Fairy Book.

Fifth graders move on to the Famous Men of Rome while also using Memoria’s Geography I which covers Europe, Northern Africa, and the Middle East (the primary regions encompassed by the Roman Empire). Geography is studied both historically and as it is today, and students also review the states and capitals of the U.S. The Book of Insects, along with its companion workbook, introduces students to classification and the insect world as they observe, study, analyze, and sketch, while also answering questions in the workbook. Math is covered with the Rod and Staff course for fifth grade. Language Arts 5 from Core Skills, Classical Composition II, English Grammar Recitation II, and Spelling Workout F are used for language arts. The fifth-grade novels are Heidi, Lassie Come Home, and The Lion, the Witch, and the Wardrobe. Supplemental reading is available for learning U.S. history through literature. Classical Core students will use Christian Studies II and First Form Latin, while accelerated students will use Christian Studies III and Second Form Latin. Accelerated students will also use Exploring the History of Medicine.

Sixth-grade history progresses to the Famous Men of the Middle Ages. In keeping with the Middle Ages historical emphasis, students read King Arthur, Robin Hood, and Adam of the Road. Geography II is also used for social studies. Students will use Language Arts 6 from Core Skills, Classical Composition III, and English Grammar and Recitation III. They will continue the study of Latin with Second Form Latin. Birds are a major topic for science with a number of books and activities, but students also read the fascinating book Exploring the World of Medicine. For math, students use Rod and Staff's Understanding Mathematics. Christian Studies III teaches salvation history through the most important Bible stories. Supplemental reading is available for learning U.S. history through literature. Accelerated sixth graders will add readings from The Story of the World: Volume 4 and Exploring the World of Biology.

For seventh grade, students journey back to Greece with Famous Men of Greece, Horatius at the Bridge, and The Trojan War. They also study U.S. History with Guerber's The Story of the Thirteen Colonies & the Great Republic (a Memoria Press book that combines two of Guerber's books) and Susan Wise Bauer's The Story of the World: Volume 4. Science uses Memoria's Book of Trees set then addresses the larger world of living things with Tiner's Exploring the World of Biology. For language arts, students use Language Arts 7 from Core Skills, Spelling Workout H, and Classical Composition IV. For Latin, students might use Third Form Latin or another level, and they are introduced to the Greek alphabet. The novels to be read are Anne of Green Gables, The Trojan War, The Bronze Bow, and The Hobbit. And, finally, Christian Studies IV provides them with a chronological survey study of the Bible. Accelerated seventh graders use the more challenging courses Fourth Form Latin and Prealgebra Textbook (College of the Redwoods). They also add Henle Latin I and Memoria Press' Poetry & Short Stories: American Literature.

Eighth graders continue their study of the ancient world. However, moving beyond the grammar stage they study history and literature at a deeper level as they tackle the Iliad and the Odyssey along with study sets for Dorothy Mills' Book of the Ancient World and Book of the Ancient Greeks. Geography is addressed with Memoria Press' Geography III. For literature, students study Poetry and Short Stories: American Literature, Bard of Avon: The Story of William Shakespeare, The Wind in the Willows, As You Like It, Treasure Island, and The Adventures of Tom Sawyer. For language arts, they also use Language Arts 8 from Core Skills along with Memoria Press' Classical Composition V. Science is taught from Novare Physical Science. For math, students study VideoText Algebra, Modules A-C. Students can continue with Fourth Form Latin or select an appropriate level of Latin if they are newer to the study of Latin. For the Accelerated program for eighth grade, students add Dorothy Mills' Renaissance & Reformation Times. For literature, they add A Midsummer Night's Dream and The Hound of the Baskervilles. Students also read The Story of Christianity by David Bentley Hart.

The tenth-grade course features A History of Medieval Europe: From Constantine to Saint Louis; Mueller's Caesar: Selections from his Commentarii De Bello Gallico (which provides Latin study in preparation for the AP exam); a selection of classical literature pieces; study of the three Greek playwrights, Aeschylus, Sophocles, and Euripides; VideoText Geometry; Novare General Chemistry; Aristotles' Material Logic; Classical Composition VII and VIII; Poetry and Prose Book II: The Elizabethan to the Neo-Classical Age; and Eusebius' History of the Early Church.

Each grade level uses a number of resources beyond those I've listed. You can check the Memoria Press website for more details. You are welcome to pick and choose resources rather than purchasing complete packages so that you can tailor your program to fit each student. Because the course of study can vary so much for eleventh and twelfth grades, there are no complete packages for those levels.Memoria Press offers yet another option for students with special needs, ages two through adult—the Simply Classical Curriculum.

If you like Memoria Press’ approach to classical education, these grade-level packages are a terrific resource that will make your job much easier.